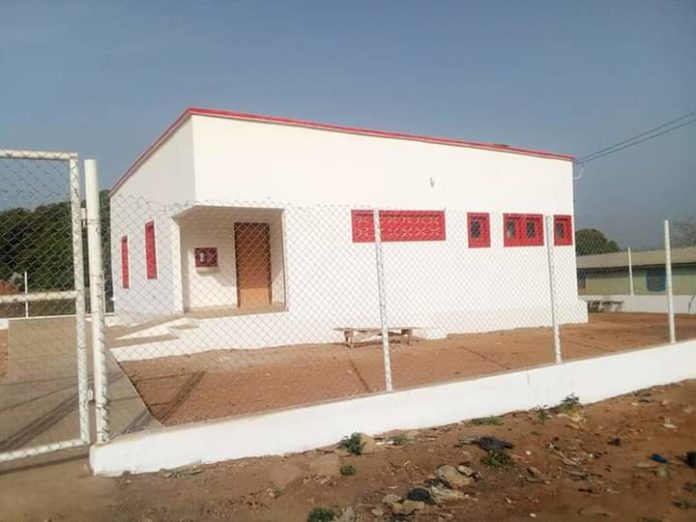 Deputy Chief of Staff and the New Patriotic Party (NPP) Parliamentary candidate for the Damongo Constituency of the Savannah Region Mr Samuel Abu Jinapor has commissioned a 16-seater ultramodern water closet toilet for the people of Attributo a suburb of Damongo in the Savannah Regional Capital on Saturday 7th March, 2020.

Speaking at a short ceremony attended by both Constituency and Regional Executives of the NPP at Attributo, Mr Jinapor said the Attributo area is very dear to his heart since that was the area he stayed during his childhood days in Damongo.

He explained that he knows almost every corner of the area and is aware the people have bewn suffering from a proper place of convenience for residents resulting in open defecation and relying on the bushes around the area which he said is a thing of the past.

The NPP Parliamentary candidate for Damongo used the occasion to pay glowing tributes to his late childhood friend Razak who he described as his ” body body” in the area and further reminded his political opponents who on daily basis describes him as an alien and stranger in Damongo to find out more about him since his grandmother is still alive and a very deep rooted indigene of Lagbonto in Damongo.

He further reminded then people gathered that he was born and bread in Damongo, attended St Anne’s Primary and Junior High School in Damongo and furtherd his education in Tamale after studying under a lantern in Damongo like those calling him a stranger.

Mr Jinapor said his focus is to bring development to the doorsteps of the people of the Damongo Constituency including jobs for the youth of Damongo and that is exactly what he is doing instead of responding to detractors who are bent on fabricating lies on his his person.

He assured the large gathering of residents of the area that he will do everything possible within his confines to open up the roads in the area as soon as possible.

The Attributo toilet is the third toilet facility Abu Jinapor said he personally financed in the Damongo township.

The Deputy Chief of staff before the commissioning of the toilet facility commissioned electrification projects in Langatre and the Bidima community near Busunu in the Damongo Constituency.

The Municipal Chief Executive for the West Gonja Municipal Assembly, Mr Saeed Muhaz Jibril thanked the Deputy Chief of Staff Mr Samuel Jinapor for all that he has been doing for the people of the Damongo Constituency and urged the constituents to vote massively for him to represent them in Parliament to be able to do more since the reward of politics is right here on earth and not in heaven as exhibited by the Deputy Chief of Staff.

The NPP Chairman for the Savannah Regiom Alhaji Sulemana Iddrisu a.k.a Professor Kalamonia in a short address pleaded with the constituents to vote based on what they are seeing today since all that the Deputy Chief of Staff Mr Samuel Jinapor is bringing onboard is unprecedented in the political history of Damongo.