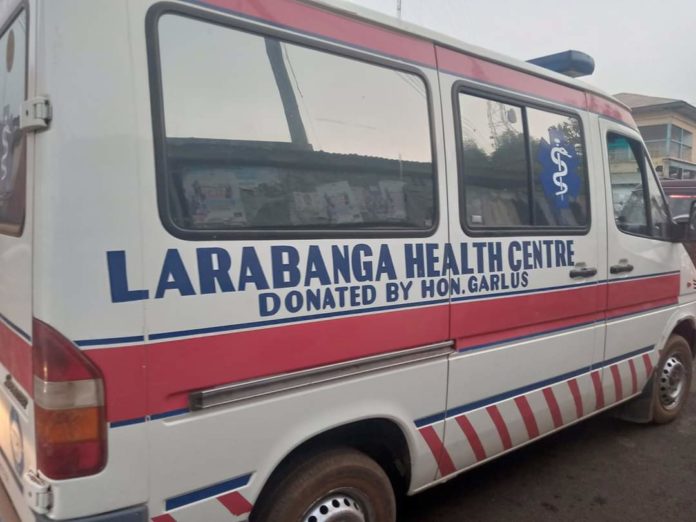 Mr Issifu Seidu Kudus Gbeadese who is the Reseaech Assistant of the Member  of Parliament (MP) for the Damongo Constituency is asking the whereabouts of Ghc 20,000 that Vice-  President Dr Muhamasu Bawunia donated to the twelve (12) Clans of Larabanga community in the West Gonja District of the Savannah Region that were sent to the Flag Staff House by the Deputy Chief of Staff Samuel Abu Jinappr and New Patriotic Party (NPP) Constituency and local Executives at Larabanga.

Issifu Seidu Kudus disclosed that two days after the return of Elders of the Larabanga Clans in on Friday, 22th November, 2019, the NPP constituency Chairman for Damomgo, Alhaji Braimah Adam and the NPP Electoral Area Coordinator Mr Osman Iddi who served as a spokesperson for the 12 clans at the Flag Staff marched to the house of the Chief Imam of Larabanga Alhaji Abutu and demanded that the money be released to them.

Mr Kudus said NPP executives put pressure on the Chief Imam and his elders to the extent that the noble man with his elders decided to release the money to the NPP.

“When the news broke out and the media wanted to know why, the NPP quickly said they took the money to be given to Samuel Jinapor, the Deputy Chief of Staff who also doubles as the sole candidate of the NPP, to buy an ambulance for Laribanga”; he said.

Mr Kudus said the NPP in Larabanga should have been telling the people what happened to the GHc20,000 and the other envelopes which were given and whether or not the Deputy Chief of Staff has provided the ambulance as indicated.

“This should have been the position of the NPP just to show to the people of Laribanga how much they love them” adding “Where is the money and the ambulance?”, he added.

Mr Issifu Kudus made these comments in response to a statement from the NPP in the Larabanga electoral area of the Damongo constituency today Thursday 5th March, 2020 that said the NPP have taken note of the long disappearance of an Ambulance the MP for the Damongo constituency, Mr. Adam Mutawakilu (Garlus) once donated to the Larabanga Health Centre when the campaign for the 2016 was peaked.

The NPP in Larabanga said their checks reveals that the ambulance disappeared immediately after the 2016 elections after it worked for only three months.

They said their search for whereabout of the Ambulance also revealed that the Member of Parliament took it for service some three years ago.

A statement signed by Iddi Adam Osman, the NPP Electoral Cordinator for the Larabanga Electoral Area in the Damongo Constituency said; “We see the long disappearance of the ambulance as abnormal and questionable especially the reason attached to its disappearance. What problem has it that it should take a whole three years and some months to be serviced?  Like other well meaning Kamaras, we  are not satisfied with that reason. Without doubt, the Member of Parliament for the Damongo constituency, Mr. Adam Mutawakilu has immensely enjoyed the support of the electorates in Larabanga and cannot take them for granted. The NPP in Larabanga have evidences to the fact that the ambulance is in Tamale operating on daily basis. On daily basis, it is seen on the streets of Tamale  carrying passengers”.

The statement added that; “On the very day he presented it to the health workers of the Larabanga Health Centre amidst pop and pageantry, many were of the view that it was a political strategy to woo the people of Larabanga to vote for him and that he will take it back should he win the election. Could this be the case as speculated?”

Iddi Adam Osman said they have given the MP for Damongo a two days ultimatum to bring back the ambulance or face our wrath.

But Mr Issifu Seidu Kudus who is the Research Assistant of the Member  of Parliament (MP) for the Damongo Constituency on a counter statement said the ambulance donated by the MP for Damongo  Constituency has been repaired and will be delivered to the people of Laribanga tomorrow 6th March, 2020.

He explained that in 2016, the MP for Damongo Constituency Hon Mutawakilu Adam Garlus provided a Benz Ambulance to the people of Laribanga and it’s environs.

He said the Ambulance is not a personal property of Hon MP for Damongo but for the people of Laribanga and the government of Ghana because the resources used was public resources and not his personal resources.

Issifu Seidu Kudus Gbeadese said one would have expected that, after the ambulance broke down, the succeeding government (NPP government) would have taken it upon itself to repair it as quickly as possible.

He said; “So, if the NPP wanted to show that they love the people of Laribanga, I expected their leadership to have called on their people in government to either repair the broken ambulance or provide one”.

Kudus Gbeadese said members of the NPP have picked information that the Ambulance has been repaired and will be brought back to Laribanga amidst cheers tomorrow, 6th March 2020, hence, their political gymnastics.