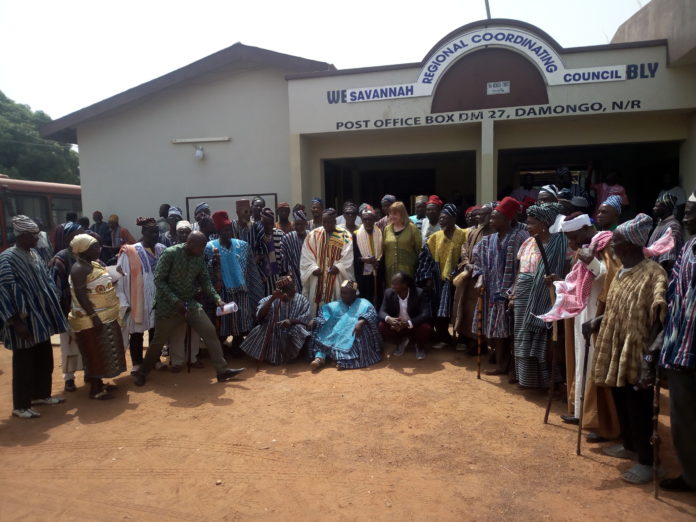 The Gonja Traditional council has handed over the Nyange redevelopment project to the World Institute of Africa Culture and Tradition (WIACT), a non governmental organisation.

The handing over ceremony took place during Gonja Traditional Council  Ordinary Meeting of Members and Key Stakeholders of the Savannah Region on the Redevelopment of Nyange held in Damongo last Saturday.

Speaking during the Gonja Traditional council meeting for members and stake holders of the Savannah region for the redevelopment of Nyange, the Chief Executive Officer for World Institute of Africa Culture and Tradition (WIACT), Mr Rashid Iddrisu Wari admonished the chiefs and people of  Gonjaland not to abandon their culture and tradition since that will hault development in the newly created Savannah Region.

The King of the Gonja  Traditional area in a speech read on his behalf by the registrar of the Gonja Traditional Council, Mr Abutu Kapori praised the Chief Executive Officer of the World Institute of Africa Culture and Tradition (WIACT) Ghana Mr Rashid Wari a son of Gonjaland from Sawla who through several sleepless nights has always thought of how to redevelop Nyange to stand the test of time.

He however said efforts were by the traditional council 2015 during Gonja Traditional Council meeting where a seven member committee was set up to facilitate the redevelopment of Nyange.

He made it known to the team and the general public that the architectural designs, survey works, clearing of a five acre site, moulding of about 1,000 blocks and some heaps of sand have been achieved so far by the council and so the collaboration and partnership with WIACT and University of Arizona Texas is in the right direction.

Buipewura Jinapor (II) on behalf of Yagbonwura thanked Mr Wari and his NGO and also used the opportunity to assure everybody present that the various areas in the Savannah Region with chieftaincy issues will soon be a thing of the past.

Buipewura Jinapor said  through the efforts and good works of the committee of eminent chiefs of which he is the chairman charged to settle all the chieftaincy issues is will resume soon after a short break after recently settling the Yazori issues and that of Sonyo.

He said the next place the committee will tackle will be Bole and Damongo of which he is rest assured will see smiles on the faces of the people in those areas.

He reminded the people of the Savannah region that the region will be measured in terms of development with the 5 other regions that were created the same time in the years to come hence development should be key in growth of the region.

Present at the meeting  was Professor Mette Jean, representing University Of Arizona USA who took everybody present at the meeting through the architectural view of the project and said WIACT will undertake archeological excavations of ruins to preserve important sites and then construct a new palace to include the permanent residence for the Overlord of the Gonja traditional area, office facilities and meeting Hall known as the Savannah Parliament where all ethic groups in the Savannah region will be fully represented including a museum that will  house the historical and cultural archives of the gonja traditional area.

The meeting had in attendance chiefs  from the Savannah Region including leadership from  the Brifors, Vaglas, Konkonbas, Hanga, North Mo traditional council, President and National Executives of the Gonjaland Youth Association.