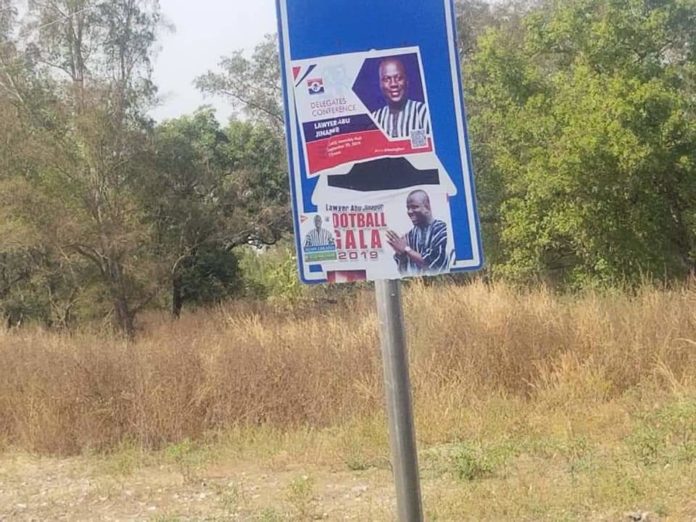 A popular Broadcast Journalist with the Ghana Broadcasting Corporation (GBC) at Wa in the Upper West Mr Seydou Bhomanjorh is calling on a Deputy Chief of staff  Mr Abu Jinapor to do the needful, especially in this festive season, by removing all his posters (flyers) on all road signs within the Damongo constituency especially on the Sawla Fulfuso highway.
Mr Seydou Bhomanjorh said people heard with sadness the involvement of the Deputy Chief of Staff, Mr Abu Jinapor in an accident on the same road near Busunu.
Mr Bhomanjorh said  just about the same time that the deputy Chief of Staff escaped unhurt from his accident the former deputy spokes person for the Electoral Commission Mr Ayuba was involved in a similar accident that  ended his life on the Tamale Kusawgu road near the constituency of the deputy Chief of staff.
Mr Seydou Bhomanjorh explained that the vehicle of Mr Ayuba run into a stationary vehicle wrongly packed on the road leading to his death on the spot.
He said it is very sad to relate here how the campaign team of the Deputy Chief Staff in the Damongo constituency in the Northern Region, have with recklessness and careless “besmeared” and “desecrated” Road Signs within the very constituency he wants to represent the good people.
Mr Seydou Bhomanjorh said on every Road Sign within the constituency,  the pictures of Mr Abu Jinapor and the logo of his party have taken center stage and in that ugly act, they have succeeded in endangering human life by  making it impossible for the average driver to exactly tell which road sign is being represented.
He said the Damongo constituency stretches from Grupe all the way to Fulfuso junction and when one drives from going to Tamale there are countless speed ramps with road signs  or sign posts cautioning drivers to be cautious on their way ahead.
“But the campaign team of Mr Abu Jinapor have ‘painted’ all road signs with the pasting of party flyers and posters  with the embossed pictures of the Deputy Chief of Staff along the Sawla Fulfuso highway on all  erected road signs”; he stated.
“The question on the lips of all is; why is it so? By this act are we not calling for avoidable road accidents especially during this yuletide? Little things like road signs count a lot for all road users especially on highways”; Mr Seydou Bhomanjorh wrote on his facebook timeline on Momday 9th December, 2019.
He added;”But here we are with  someone in a position of trust at the national level because he must be a Member Parliament  is busy endangering human life and property by wrongly ‘besmearing road signs with his flyers and posters”.
Source: nkilgifmonline.com