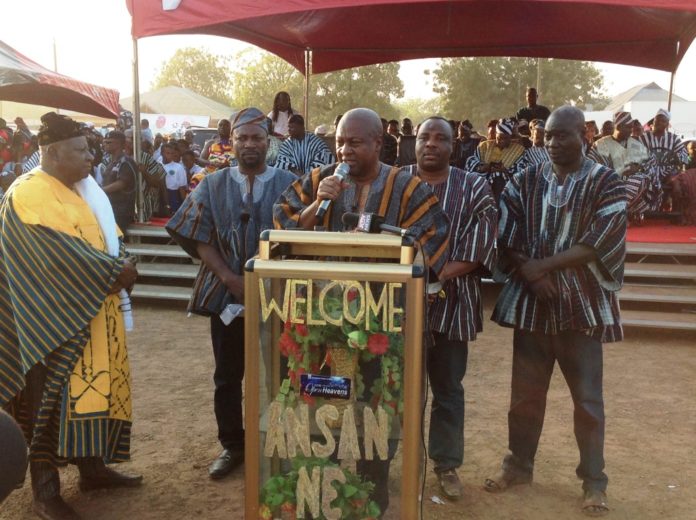 The Flagbearer of the National Democratic Congress (NDC) and former President of Ghana John Dramani Mahama has urged Ghanaians to Vote “No” in the December 17 referendum to stop political parties from having hands in the local level elections.
Speaking at Buipe in the Central Gonja District of the Savannah Region during the annual Damba Festival of the Chiefs and people of Buipe on Saturday 30th Novembe, 2019, former President Mahama said Ghana is already polarized politically at the top hence making the local level election political will spell doom for Ghana since the country is already polarized politically.

He however supported the elections of Metropolitan, Municipal and District Chief Executives (MMDCE’s) for property accountability to the people.
Former President John Mahama said it should be made clear to Ghanaians whether the referendum is about political parties should participate in local level election or MMDCEs should be elected since many of the government officials either do not understand the distinction in the referendum or it is deliberate calculation to confuse the people of Ghana that the referendum is about the election of MMDCEs.
He also talked about the pressure on the MMDCE’s as a result of the starvation of the various district assemblies of funds and suggested that the assemblies must be exempted from the current realignment law for them to get the full compliment of the district assemblies common fund for development to take place in the various districts.
The Minister for Regional Reorganisation and Development Hon Dan Kwaku Botwe who was the Guest of Honour called on the people of Savannah Region to remain United like how they say United before the creation of the Savannah Region. He said it took Gonjas 60 years agitating for a Region until President Nana Akufo- Addo granted the executive instrument.
The Buipe Damba had the Yo Naa (Chief of Savelugu), Abudulai Yakubu Andani as Chairmnaof the Durbar. Many other dignitaries as well as political party leaders across the Savannah Region were part of the Damba.
Source: nkilgifmonline.com/Zion Abdul- Rauf