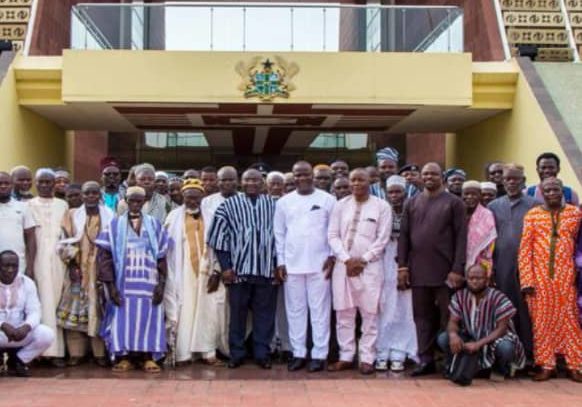 The Chief Imam of Larabanga in the West Gonja District of the Savannah Region, Alhaji Abutu on Wednesday, 20th November, 2019 led a delegation of elders of Larabanga to the Jubilee House to pay a courtesy call  on the vice president of Ghana, Dr. Mahamudu Bawumia.

The Larabanga Imam in his speech at the Jubilee House expressed  the honour he and his people had for visiting the National Palace of Ghana and to pay a courtesy  call on the vice president. He added that their visit to the Jubilee House will get into historical records as the first time the  Chief Imam and elders of Larabanga are specifically visits the seat of Ghana to interact with either a president  or vice president.

The Chief Imam of Larabanga also called on the vice president to use his good office to facilitate a brotherly relationship between Larabanga, a historical Islamic town where one of the world’s historic  heritages is situated and Saudi Arabia, the acclaimed Islamic headquarters in the world. According to the Chief Imam, this relationship will promote cultural exchanges, education, tourism and ultimate mutual economic empowerment.  He also made a plea to the vice president to consider a number of elders of Larabanga in the 2020 Hajj pilgrimage. He concluded by  assuring the Vice- President of their massive support for him now and forever.

The Vice- President thanked the delegation for taking time off their busy schedule to visit the Jubilee House. He stated that he was ever grateful to the Chief Imam and the elders of Larabanga  for their prayers that pushed him to that office. He added that after the prayers were offered to him when he visited Larabanga  in the run up to the 2016 elections, he realised that something positive was about happening. He asked the Chief Imam and his elders to continue offering their prayers  for the president and the government so that they can continue executing their well intended policies and agenda for the good people of Ghana. He promised the delegation that he will work assiduously  to ensure that their plea presented to him are considered.

He concluded by calling on the Chief Imam and the elders  of Larabanga to offer a special prayers for the success of Lawyer Samuel Abu Jinapor in his endeavours because he is working hard that Larabanga to be specific and the Damongo constituency in general is developed.

The delegation was made up of Alhaji Abudu Dramani who represented the Tinkpeema, Mallam Iddrisu Yussif who represented  the Bukarizeu clan, Mr. Abu Mohammed Alhassan, who stood in for the Chief of Larabanga,  Alhaji Abubakari Sadik, head of the Kpasabuu clan, Mallam Mahama Iddi, head of the Sondogra clan, Alhaji Mahama Adam, head of Dabkurugu clan and Alhaji Mbemah Sanda, representative of Mankargu clan.

Members of the Accra branch of Kamara Youth Association, a son of Larabanga on the Hajj Board Alhaji Braimah Adam and the District Chief Executive (DCE) for the West Gonja district who is also a son of Larabanga were part of the delegation.