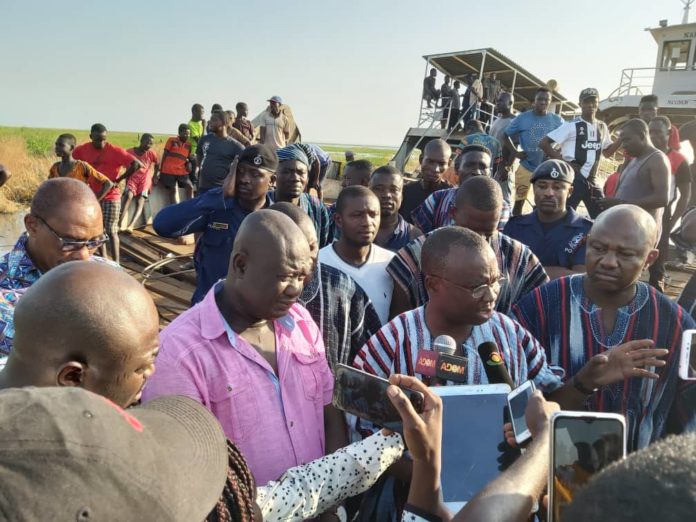 The Savannah Regional Minister, Hon. Adam Braimah Salifu has hinted of plans to construct a bridge to link Makango in the East Gonna Municipality of the Savannah Region and and Yeji in the Bono Region in the near future.

Speaking to the media after visiting Makango where a ferry carrying passengers and vehicles sunk after loading enroute to Yeji last Friday 15th November 2019.

The Minister who is the Member of Parliament for the area said he is happy no casualty has been recorded in the unfortunate accident and praised the government for immediately bringing in another ferry to carry passengers across to and from Makango.

Meanwhile, residents of the community are complaining about the effects of the sinking of the ferry on business activities in the Makango community.

The submerged ferry is popular on the Makango to Yeji route and was bound for Yeji in the newly created  Bono Region when the unfortunate accident happened.

Eliasu Mejida, a resident of the community said the road network of the area is another problem that the government must seriously consider and further blame the authorities of the ferry of what has happened since they are aware of the leakages in the pontoon of which water is drain constantly with machines without fixing the holes.

Meanwhile, serious efforts are underway to retrieve the 60 year old ferry from the waters of Makango with divers and workers of the Volta River Authority busily working to retrieve the ferry.

Naval Captain Akabutey confirmed to the media during interaction stated that the ferry currently in use will be replaced with a different one permanently whilst the submerged ferry  will be sent to Accra for maintenance.