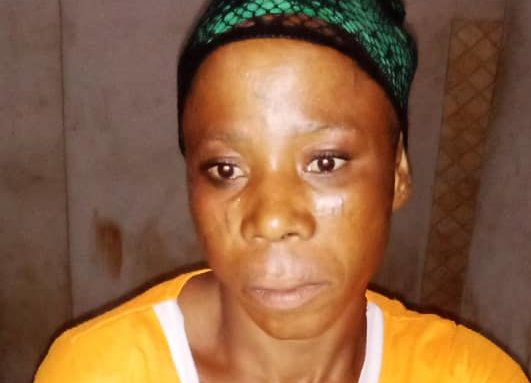 The woman who allegedly kidnapped Mohammed Fadilla, a four year old kindergarten pupil at her fathers house at Lamashegu in Tamale  about a month ago, has been arrested at Masaka a Community near Salaga in the East Gonja Municipality of the Savannah Region in the night of Monday 4th November, 2019.

The alleged kidnapper Fusiena Adam was traced to Masaka after a tip off and arrested by family members of little Fadilla and handed over to the Tamale Lamashiegu Police who also transfered the suspect to the Northern Regional Police Command for further investigation.

The husband of the woman (alleged kidnapper) disclosed to the family members of little Fadilla who went to Masaka that the wife brought a little girl to the community and said it was her twin sisters daughter but he (the husband) made his wife (Fuseina Adam) to send the little girl back to Tamale  because she fell sick.

The distressed father of Fadilla called Mohammed Daboya told Bole based Nkilgi fm a month ago that the alleged kidnapper came to his house in Tamale and claimed to have been directed to the area in search of her mother whom she had been searching for and had to trace all the way to Yagbon, a farming community in the North Gonja District of the Savannah Region before coming to Tamale.

According to Mr Mohammed Daboya, the woman who spoke very fluent Gonja language came to him at a time when his daughter had also returned from school.

He felt the daughter went to the mother inside the house only to realise after asking his wife about little Fadilla that she never returned from school. The mother also felt she might have been at the father’s shop.

A search party was conducted in Tamale which  proved futile with relatives tracing to Yagbon in the North Gonja District where many people claim they do not know the woman in question.

The woman was later seen at Masaka by someone who gave a tip off and was arrested by relatives of Mohammed Daboya yesterday and brought to Tamale.

The Northern Regional Police Command have since began investigations in earnest with a crack team of investigators dispatched to the Masaka community near Salaga with the victim on Tuesday 5th November, to do some investigations after which they will return to Tamale.