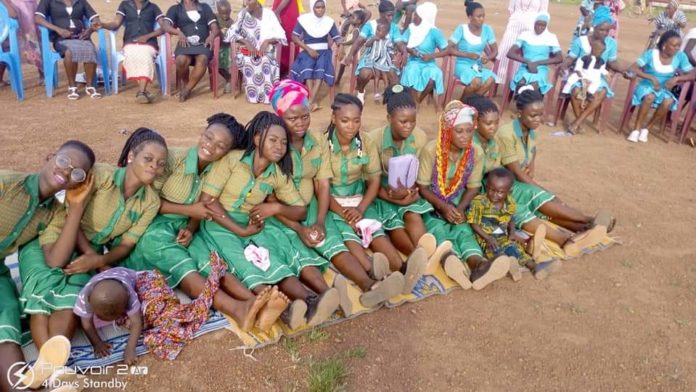 The “Abranyo Girls Empowerment Centre, in collaboration with ‘DKA Austria’ a Non-Governmentental Organization which aimed at reducing the rural urban migration among the young girls in our rural communities has supported Six Girls in the North Gonja of the Savannah Region in the fields of sewing, bread beaking, soap making and a few other areas.

At the fourth Annual graduation of the Abranyo Girls Empowerment Centre in Daboya at the weekend, six (6) beneficiaries from the centre in Daboya graduated and were awarded two certificates, one from the Centre and the other one from the Garment makers association of Ghana. Each graduate also received an amount Ghc300 worth the cost of a brand new sewing machine, Ghc500 as a start-up capital to start their own career pursuance.

The organisation keep moving from district to district on rotation with the first badge of graduation in Daboya in 2013 with nine (9) girls graduating and benefiting from the magnanimity of the Abranyo Empowerment Centre.

In 2015, seven (7) girls graduated with eight (8) girls graduating in 2017. More than two hundred (200) girls have so far benefited from the organization in the in Districts in Savannah Region that the organisation operates.

At every years graduation beneficiaries within the five centres in the Districts are brought together to familiarized  with each.

The objective of Abranyo Girls Empowerment Centre and DKA Austria is to ensure every graduate will be sent back to her community to also train more girls who are interested in the career.

For the past ten (10) years, 20 women have benefited from DKA Austria, by travelling to Austria for an “Inter-Cultural Exchange” between Ghanaians and the Austrians.

Madam Rashida has been one of the beneficiaries from Daboya centre to have travelled for the “Inter-Cultural Exchange” in Austria in 20017.

Speaking at the fourth annual graduation ceremony in Daboya, the executive director of Abranyo Girls Empowerment Centre, Mr Anthony Ayoka, thanked the Wasipewura for accepting them into the land of wasipe.

Mr Anthony also appealed to the girls who are still training and those who have graduated to be serious in their field of training and career persuance as another ten (10) girls are expected to be selected to also go to Austria for further training and inter-cultural exchange programs.

The Project Coordinator for the Daboya centre, Mahama Asafo Musah, thank the member of Parliament for Daboya-Mankarigu Constituency, Hon. Shaibu Mahama for being one of their key partners for the past three years.

He said Hon. Shaibu Mahama has always been supportive the organisation financially anytime he is called upon to do so ans this year not left out. On behalf DKA Austria and Abranyo Girls, Mr Asafo thanked the MPHon. Shaibu Mahama.

Mahama Asafo Musah on behalf of the organisation expressed his appreciation to Chief Nagberiwura Mohammed Musah, who he said is ever ready and always avail himself to support the Abranyo Girls Empowerment Centre anytime he is called upon to do so.

Mahama Asafo Musah is also calling on more girls within the Gonjaland to take advantage of this career opportunity and get themselves involved for their own future benefit.

The constituency Secretary of the ruling New Patriotic Party (NPP), Mr Mustapha Mensah, who spoke on behalf of the DCE, thaned the staff and management of Abranyo Girls Empowerment Centre for the good initiative. He reiterated the DCE’s readiness  and willingness to support the organisation at any giving time.

Mr Mustapha Mensah made a cash donation of Ghc300 on behalf of the DCE, the NPP Parliamentary candidate Alhaji Mahama Asei and the entire NPP party.

In attendance at the graduation ceremony was Wasipewura’s representatives, the Savannah Regional Vice -Chairman of the National Democratic Congress (NDC), Alhaji Abubakari Abdullah, who represented the Hon. Member of Parliament and the NDC party, representatives of the NPP party led by the Daboya- Mankarigu constituency Secretary, Mr Mustapha Mensah. T