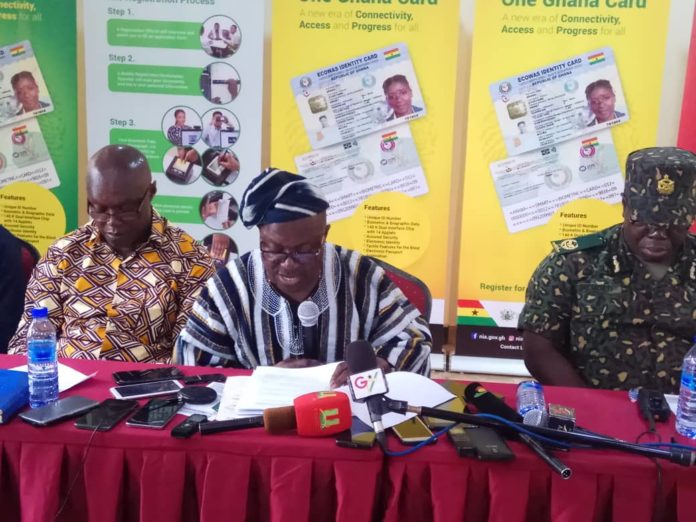 The National Identification Authority (NIA) has parried allegations that the ongoing mass registration exercise of the Ghana Card would be used during the 2020 general elections in Ghana.

Addressing the media at Tamale yesterday Thursday, 3rd October, 2019 covered by Bole based Nkilgi Fm, the Chief Executive of the authority, Prof. Kenneth Agyemang Attafuah said that is not part of the NIA’s mandate.

“Wherever that presumption comes from, it’s hard to tell”; he said.

According to him, the mandatory use of the card is a requirement for the acquisition for a driver’s license, a passport and the registration of the voter’s ID card.

Nkilgi Fm was at Tamale for the programme and this is what the Chief Executive of the National Identification Authority, Prof. Kenneth Agyemang Attafuah

That was the Chief Executive of the National Identification  Authority, Prof. Kenneth Agyemang Attafuah

“That tells me that the Ghana card is not the voter card but it’s a condition for registering it, I haven’t heard the government or the electoral commission indicate so and I think it won’t lie in the mouth of government in the first in place; because it is the EC that determines these matters in accordance with our constitution.” he said.

“So I don’t know but politicians can know things, see things and perceive things that an ordinary mortal like me may not have the capacity to see, know or perceive”, he emphasised.

The NIA Boss said the Ghana card is supposed to promote social, political and economic purposes according to the laws of the authority.

He noted: “so if we get to the destination where we (as people) determine that this is the time in our development where the Ghana card should be used to achieve or promote a political purpose such using it for voting, I think it would be a wonderful thing.”

Proff Attafuah said the NIA is set to commence registration for the Ghana Card in the Savannah, North East and Northern Regions from today Friday 4th October 2019 and end on Wednesday 23rd October 2019 and that the registration centres will be open from 8:00am to 5:00 pm each day excluding Sunday and Public Holidays.

He said no one will pay or give money to any of their officials before, during or after the registration process and it will be considered as a bribe which is criminal.

The Chief Executive of the NIA disclosed that about 3,000 officers have been recruited and trained to undertake the exercise across 750 registration centers.

He said so far 2.9m Ghanaians have been registered in the Greater Accra, Volta and Oti regions. He said the exercise requires the collaboration and cooperation of all stakeholders. He urged the public to vigorously police what he described as the boundaries of the Ghanaian citizenship.