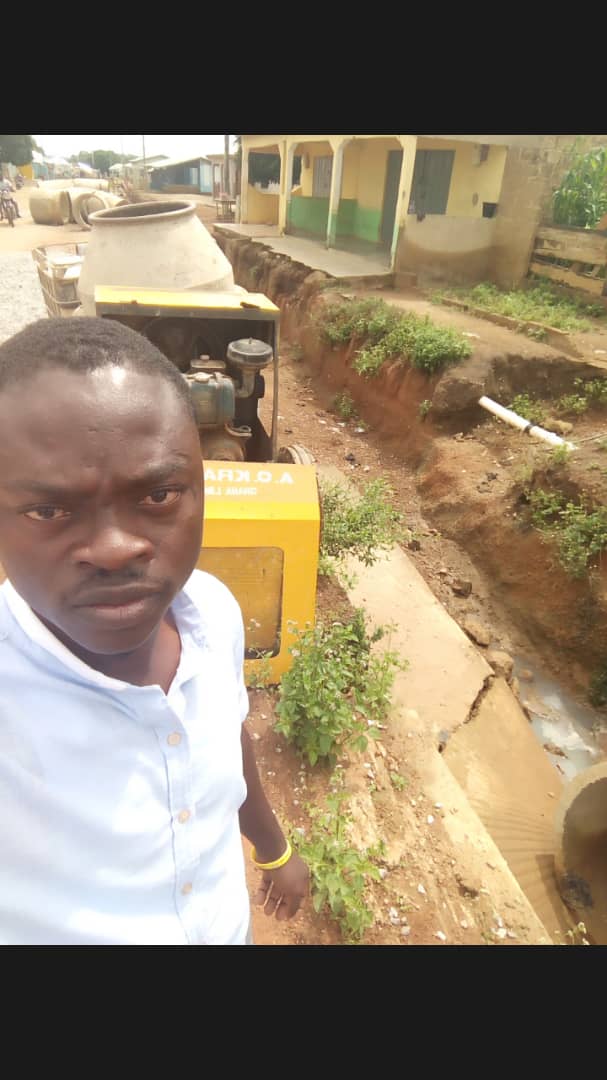 In a desperate attempt by the New Patriotic Party (NPP) to match up with the unprecedented achievements of former President John Dramani Mahama (JM) and the National Democratic Congress (NDC) in the Bole township, they have  resulted to public deceit in order to achieve that agenda.
This grand scheme by the NPP government neccesitated their starting a ‘Cover drain’ (gutter) project on the Bole ‘Mango-lane’ road somewhere March April of 2019.
The government relocated the contractor (AO KRANOC) working on the Bole to Chache border road started by President John Dramani Mahama before loosing power in 2016 to do that job.
AO KRANOC company due to the relocation, left behind heaps of unspread gravel on the Bole to chache road resulting in the deaths of some five (5) persons with many sustaining various forms of injuries through accidents since late 2018.
An NKILGI FM reporter by name Wayo Bakari escaped death narrowly on stretch on his way to Mandari for an assignment.
Work on the drainage (covered gutters) project started with the contractor using a bulldozer to dig huge gutters along the Mango-lane road with the pledge that “culverts” will be used to cover the dug gutters to promote good sanitation and improve drainage systems on that stretch of road constructed by JM andthe NDC government.
The people of Yelwa and Jakala in Bole were all elated to witness the kick off of the project since they were made to believe it will transform the area into “Trasaco”.
However, the people were disappointed by this super incompetent and non- performing NPP government since the contractor put in charge of the project after creating ‘Death traps’ for both children and adults alike after he abandned site due to non payment by government after creating huge, deep and uncovered gutters on that road.
Motorists are not left out. In fact I nearly died on that road when I run into a speed rump constructed by the contractor without any sign post indicating same. The huge gutters created by this contractor (AO KRANOC) has made the road a no go area for children since they can fall into them and die as a result.
Businesses around this road has gone very very bad since shops by the road side has been cut off from the Bole main road, a direction most of their customers come from.
Moreover, heaps of gravel, chippens and broken down machines left on the shoulders of the road without any warning signs has become a threat to the lives of many citizens of Bole especially those who are not familiar with the ‘sham’ caused there by this deceptive NPP government. The situation becomes even worse anytime it rains since the road becomes very muddy within those periods.
Not even the loud calls and pleas from the people for the NPP government to come to their rescue has gotten any results.
Media houses in Bole especially NKILGI 103.7 Fm has reported severally on this abandned “death trap” created by the NPP but has yielded no results.
Several attempts by the member of parliament Hon Yussif Sulemana to get the District Chief Executive (DCE) and her team to attend to the project has also proven futile.
The people of Bole ask if the huge gutters created are meant to sacrifice children for election 2020 or they are planning on presenting them to Bole people as our share of their promised “one village One dam” (1V1D) which they have so far failed to deliver?
Does the NPP want to record death cases on that road before they act? Is this the competence the NPP promised the people of Bole? The pictures attached to this piece will break your heart.
I urge the good people of Bole to as a matter urgency join the “supersonic” train of the NDC to work hard and also vote for JM and Hon Yussif Sulemana come 2020 since they are  committed to bettering their lives and that of their communities.
By Iddisah Tahiru Omega(NDC Deputy Communication OfficerBole-Bamboi)