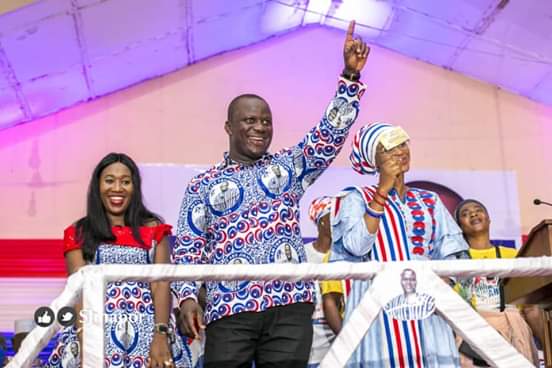 A Deputy Chief of staff Samuel Abdulai Jinapor has assured the people of the Damongo constituency in the Savannah Region that the name of the constituency will be written in gold if he is given the nod as the Member of Parliament (MP).

The popular acclamation of Mr Jinapor as the New Patriotic Party (NPP) candidate for the Damongo constituency of the Savannah Region at a colourful event at the Damongo Senior High School Assembly Hall yesterday Saturday 28th September, 2019 was attended by all delegates comprising the 17 Constituency executives,12 electoral area coordinators, 5 patrons and 5 council of elders and 315 polling station executives who all chanted in unison when asked if they wanted the Deputy Chief of Staff as the NPP candidate for the Damongo constituency.

Addressing the delegates after his endorsement as the candidate for the party after going unopposed, Mr Abu Jinapor touted a lot of what he has done including the building of schools, extension of electricity to some communities to some communities in the constituency and promised to do more when given the nod.

He said a lot needs to be done including the building of an ultra modern Community Center in the Damongo township expected to  commence soon.

Information minister Hon. Kojo Oppong Nkrumah who was the special guest of honour for the program in a speech to the delegates of party in  Damongo  said the eyes of the whole country is on Damongo and and so he had to ask permission from  President Nana Addo in far away New York to fly down to Damongo to witness the acclamation of Deputy Chief of Staff Samuel Abu Jinapor.

Hon. Nkrumah charged the delegates to work very hard to ensure Mr Jinapor wins massively come 2020 since the NPP knows very much the worth of him.

He further assured the people of Damongo that Samuel Jinapor will not just be an MP who will be mute in Parliament but will contribute to what ever goes on in the floor of the house when given the nod.

Defence Minister Hon. Dominic Nitiwul also addressing the delegates in Damongo said he has informed the member of parliament for Damongo Hon. Adam Mutawakilu whom he described as his personal friend that his days are numbered in Parliament.

He also said the NPP is never complacent of winning 2020 but he can assure the whole of Ghana that the  NDC should forget winning the election next year.

The Savannah Regional Minister Hon. Salifu Adam Braimah also addressing the delegates asked for unity in the party and further tasked every body in the party to work hard towards maximizing votes for the party and winning the Damongo seat for the NPP.

Some other speakers at the Conference who addressed the delegates included the District Chief executive  (DCE) for West Gonja Jibreel Saeed Muhazu; District Chief executive  (DCE) for Bole Madam Veronica Heming, the Municipal Chief of Executive (MCE) for Sagnerigu Madam Mariam,  the NPP Chairman for the Savannah Region, Proffersor Kalamonia and the Damongo constituency of NPP Chairman Alhaji Braimah Adam.