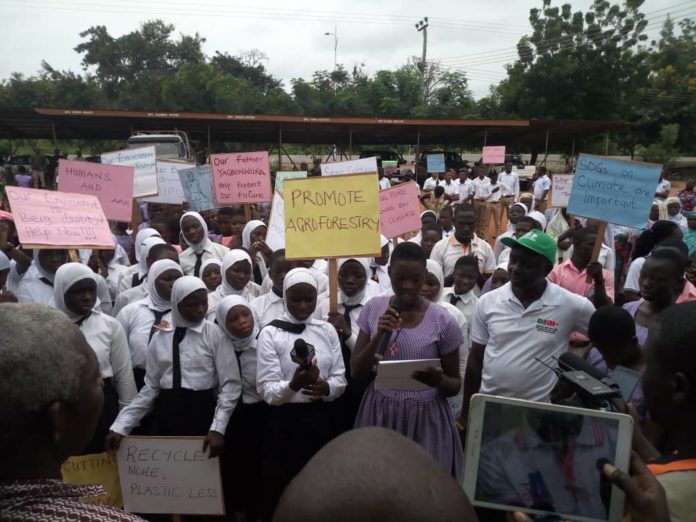 Environmental Clubs from various Schools in the Savannah Region yesterday Friday 27th September, 2019 have presented two separate petitions to the Overlord of the Gonja Traditional area, Yagbonwura Tuntunba Boresah Tuntumba and the Savannah Regional Coordinating council to demand actions to mitigate Climate Change as part of the Global Strike for Climate Strike yesterday

‘The Global Climate Strike dubbed; “Fridays for Future” float had students in some schools in the region march through the principal streets of the Savannah Regional capital of Damongo starting from the Damongo Nurses Training College entrance, through to the lorry park where the message of ending climate change action was delivered  to the drivers, passengers and the community members.

The team then moved to the Jakpa Palace where a petition was read and presented to the Overlord of the Gonja traditional area, Yagbonwura Tuntumba Boresa Sulemana (I) by Master Awal Seidu, a student of Ndewura Jakpa Technical Senior High School on behalf of the team.

Recieving the petition on behalf of the minister, a Deputy Regional Coordinating Director, Alhaji Abu Forgor thanked and assured the public that the Savannah Regional Coordinating Council will work closely with the district assemblies in the region to help improve the issues of climate and the environment as a whole.

The petition of the students among many environmental issues raised said; “We are experiencing rapid deforestation and severe environmental degradation with the subsequent effects of erosion, loss of soil nutrients leading to very low agriculture productivity. Our water bodies are drying up and Pest and Disease outbreak cannot be left of the hook”.

The petition also mentioned that the impact of the degrading environment has further resulted in shifting weather patterns that threaten food security and
unprecedented climate catastrophe. Let us not underestimate the cost of losing these ecosystem services and the implications it may have on our lives.

“Over the years, climate change has become a global headache. Gonjaland in recent times has suffered long period of drought and high temperatures with severe water shortages, little rainfall preceded with strong and frequent thunderstorms and the erratic rainfall pattern coupled with high temperatures make farming which is the core occupation of the people risky and has led to low productivity”; the petition stated.

The demands contained in the petitions presented to both the Yagbonwura and the Savannah Regional Minister included the following:

1. All the District Assemblies in Savannah Region are informed to take Proactive measures to halt ongoing illegal logging and unsustainable charcoal production.

3. Pollution of the environment with plastic waste be minimized or stopped if possible.