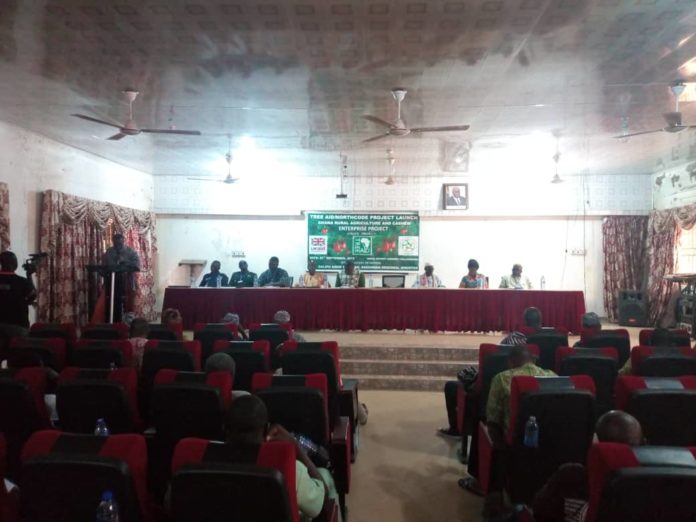 Tree Aid, an international development organization that helps villagers living in the drylands of Africa to unlock the potentials of trees to reduce poverty and protect the environment has launched a three year project in the Savanna Regional capital of Damongo dubbed Ghana Rural Agriculture And Cashew Enterprise (Grace Project) on

The focus of Tree Aid is on natural resources management, forest governance, village tree enterprise, trade, food and nutrition with the objective of strengthening the capacity of farmers to some increase yields of cashew plantation through cashew-legume intercrop with integration of bee keeping. This is aimed at reducing poverty especially among women and the youth in rural areas by increasing income through cashew apple processing ,building strong cooperative structures and establishing value chain linkages.

Speaking at the launch of the project, the country programme Manager for Tree Aid Ghana, Mr Jonathan Naaba said the  project is targeting a total of 3600 rural persons comprising of 1050 women,1500 men 1050 of the youth.

He said his project supports communities on forest governance to allow people in the communities to sustainably establish community forests and managing them for mutual benefits.

He further said the cashew apple (fruit of the Cashew) estimated around 800,000 tons yearly is not utilised every year. Mr Naaba said it is an extra income to people engaged in cashew production which the organization will link them to markets to sell them to make extra income.

The Co-ordinator of the project also in his speech said this is the first huge and very ambitious project of hope to be launched in the newly created Savanna region by an NGO as far as bee keeping, legumes and cashew production is concern and assured farmers that the Grace Project was carefully planned and will be carefully executed in West Gonja district of the Savanna Region in a bid to reduce poverty in the area.

He also urged farmers to increase income from a crop that has an expanding market and high demand for more than 10 years.

He said they will work closely with relevant stake holders in the cashew value chain especially the district Assembly to compliment governments efforts of improving the lives of citizens in the district and urged every body to come onboard to assist them deliver and deliver well.

The Savanna Regional Minister, Hon. Salifu Braimah Adam whose speech was read on his behalf thanked the NGO for pushing such a big project to his region and fully pledged his support towards the success if the project.

The King and Overlord of Gonja Yagbonwura, the District Chief executive (DCE) for West Gonja Hon Muazu Saeed Jibril and the Member of Parliament (MP) for the Damongo Constituency Hon Adam Mutawakilu Adam pledged to support the success of the project in the West Gonja district.

The Chairman for the West Gonja Cashew Farmers Union Mr Iddrisu Sumani popularly called Azambuja appealed to beneficiaries of the project to attach seriousness to the Project to enable them explore the full potentials of the project.

Mr Azambuja said the West Gonja District is very privileged to have such a project and therefore believed the unemployment and joblessness especially among the youth would be reduced totally if much attention and seriousness is attached to the project.