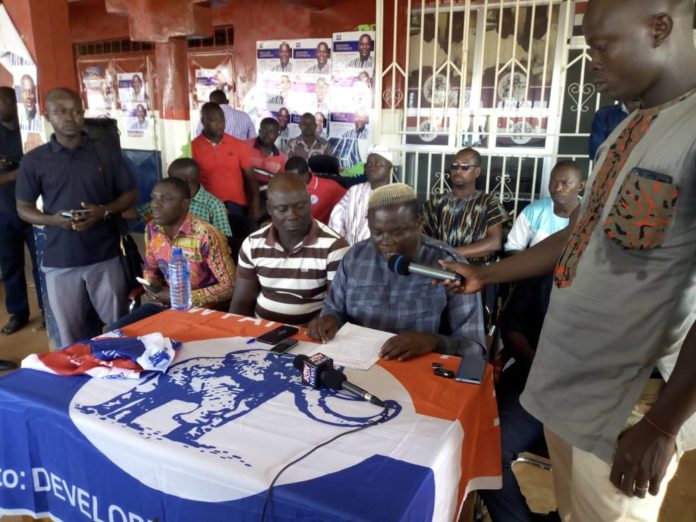 The ruling New Patriotic Party (NPP) in the Damongo Constituency has said that the National Democratic Congress (NDC) and former President Mahama have never been denied access to the Damongo Senior High school (DASS) and other schools in the Savannah Region and so should stop their lies and whining over the use of schools by the NPP in the Region.

Addressing the media in Damongo on Thursday 26th September, 2019 at a Press Conference at the constituency party office, the Chairman of the party in the Damongo Constituency, Alhaji Braimah Adam saidAlhaji Adam said it is absolutely false that the former President John Dramani Mahama was denied access to the school and called on the media to visit the school to ascertain the truth of the matter saying that the secretary was asked to assure the management of the school that what happened at Garu in the Upper East Region following Joshua Akamba’s visit to the Garu SHS  will not repeat in Damongo, but the secretary never returned to say a word.

The NPP Chairman for Damongo also said it is misleading to suggest that the NPP is the first political party to hold a political event at the Damongo SHS and that the NDC in recent times held various political events at the school.

Speaking on the issue of NPP decorating the entrance of the Damongo Senior High School with NPP party colours that NDC have raised, the Damongo Constituency Chairman of the NPP Alhaji Adam said the NDC over the years also used the school for their political  activities, decorating the school in a similar way without anybody complaining.

He referred the NDC as a bunch of liars and very desperate people who are not truthful about the coming into Damongo of former President Mahama last month.

Alhaji Braimah Adam said the Damongo MP is an absentee who does not visit the Constituency and only started going round because of threat of loosing the Damongo seat in 2020 to the NPP.

Alhaji Adam further described the Damongo legislature as non- performing who can not show anything tangible for his share of the common fund and needs to immediately be replaced for woefully not living to expectation as an MP for 8 years in office.

The Damongo NPP Chairman further accused Hon. Mutawakilu of desperately mobilizing money to some regional executives of the NDC to organise a Press Conference to run down the deputy chief of staff Lawyer Abu Jinapor who is to be confirmed as the NPP parliamentary candidate for the Damongo Constituency on Saturday.