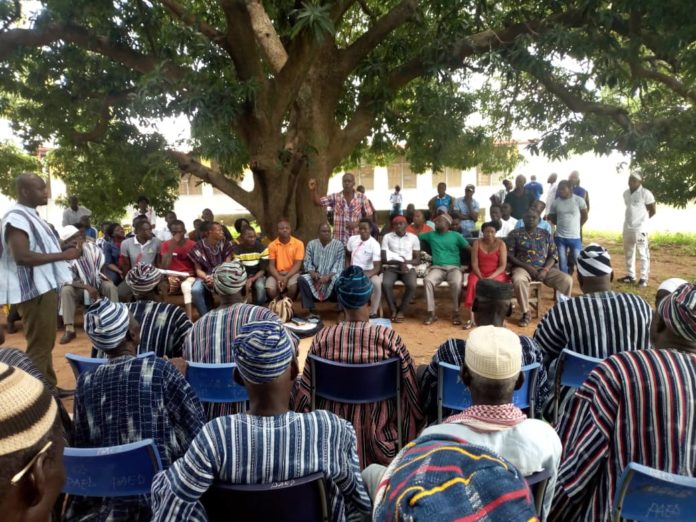 The Overlord of the Gonja Yagbonwura Tuntumba Boresah has sent a delegation of Chiefs to the West Gonja Hospital in Damongo following the strike action embarked on by the health workers union of the facility.

The Chiefs were led into the hospital by the Linguist of the Yagbonwura’s Palace of Alhaji Afuli Losina.

Speaking in a meeting with the workers of the hospital covered by Bole based Nkilgi Fm, Alhaji Afuli speaking on behalf of the delegation said Yagbonwura sent them to the hospital to find out why one of the biggest hospital in his Kingdom was not in operation since last Friday resulting to the closure of almost all the wards in facility.

The leadership of the hospital who took turns to address the chiefs, gave several reasons that led to the strike action.

This resulted into the bringing in of one Father Daniel Saaka who pleaded with the nurses to continue working whilst management was given a week to address the concerns of the workers but management still ignored them.

They said the Savannah Regional Minister, the District Chief Executive (DCE) for West Gonja and opinion leaders from Damongo came to speak to them to resume work when they went on a sit down strike in July 2019 for 9 days which the obliged and went back to the wards to resume duties.

The Nurses said the Bishop for the Damongo Catholic Diocese who is the head of the hospital never said anything to them and went to Accra to bring top persons from the Ministry of Health to plead for the problems to be solved.

They West Gonja Hospital Nurses further enumerated the various challenges that they are faced with in discharging their duties at the facility which when addressed will bring to a closure to the issues in the hospital.

They first of asked for the hospital to withdraw the top-up payment that the staff is charged like any other patient in the hospital with the NHIS  card and also asked for the payment of all arrears interms of allowances due them since 2014 according to the hospital bargaining agreement which every worker is entitled to 10 cedis a month.

The workers also alleged that some group of workers in the facility have never missed their allowances such as vehicle, cylinder, fuel and others which other workers including Nurses are discriminately denied.

They went further to talk about how it is difficult to get a study leave in the hospital by nurses whilst some 4 doctors of the hospital are currently in school which the see to be very discriminatory also.

They gave so many reasons why they think it will be very highly impossible to work under  the current hospital administrator whose name was given as Mr Remy, who has been asked to step aside whilst the 5 member committee set up to investigate the causes of the problems in the hospital does it’s work.

Many of them who were peeved alongside the chiefs after how series accounts of his actions is undermining their work in the hospital.

According to them, the hospital administrator has very poor human relationship with them as he has less respect for the workers irrespective of age. Mr Remy on several occasions verbally and in written form insults workers on duty to the point of commanding some staff of the hospital to ran like school children to him in the full glare of patients who were in the hospital for medication.

The Nurses also raised the issue of how the matron for over 3 years refused to hand over a motorbike donated by the Member of Parliament (MP) for the Damongo constituency, Hon Adam Mutawakilu Garlus to a nurse who had his motorbike stolen in the course of duty in the hospital with the donated bike still under lock and key.

They alleged  administrator is extorting money from staff of the hospital and causing financial loss to the hospital since he is allegedly currently keeping an official vehicle which he is using to attend funerals, outdooring ceremonies etc after some two vehicles were donated to the hospital by some donors whilst the only ambulance in the hospital is being used to carry oxygen cylinders to and from Tamale.

The Nurses said he is also on record to have arranged with the police in Damongo to have handcuffed one of the staff of the hospital and a search conducted in his residence without a search warrant with the excuse of looking for scrapped metals the hospital had discarded.

The leadership of the Nurses also alleged the Matron of the hospital who they demanded should step aside has ever slapped a staff and also destroys uniforms of staff if she sees anything wrong with the uniform like it is happening in the Senior High Schools whilst in the collective agreement Nurses are supposed to be given uniforms which has not happened in the Damongo hospital.

They asked the Yagbonwura’s delegation why they have been able to work in the Damongo Catholic hospital for over years under some administrators and matrons only to have problems with the current ones?

They said it is on record that the current administrator was chased out of Tuna in the Sawla-Tuna-Kalba District of the Savannah Region amidst beating when he was managing the Tuna Health Center only to be accepted in Damongo to continue with his incompetent way of handling issues relating to his work.

The Nurses and staff of the hospital have however assured the chiefs and people of Damongo that they will return to work in the next hour if the Overlord intervenes to address concerns such, retrieval of the pickup as soon as possible from Mr Remy; Yagbonwura and the Bishop should assure them by copying  them letters written to both the  Matron and the administrator not to be part of the hospital administratration and getting 3 persons to be working on the interim for the hospital since there is a lot of work to be done whilst the remaining issues are tackled later.

Alhaji Afuli on behalf of the Yagbonwura thanked the Nurses for not destroying any property of the hospital and assured them of the retrieval of the pickup as soon as possible and immediately invite the leadership of the hospital  led by the Bishop to his Palace to put before them all that they have raised. He said two persons can not hold the hospital to ransome.

Yagbonwura’s representatives later met with representatives of the hospital headed by the medical supretendant Dr Saadare Anlaagmen who came in the company of 3 Reverend Fathers from the Catholic Church representing the Bishop.

The concerns of the health workers were put before them by the Yagbonwura’s team. The Hospital team assured the representatives of the Overlord and his chiefs that the car will be brought back and handed over to the medical superintendent latest by close of day tomorrow Tuesday.

At least, about 3 people have so far passed on following the strike action. A visit to the hospital today saw all the wards closed with the exception of the maternity and  children’s wards. Pressure is on the town clinic with many patients moving to Tamale to seek medical care