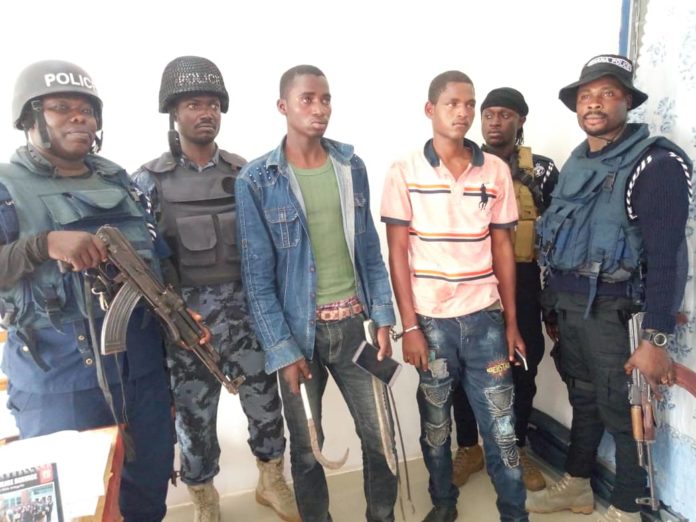 Speaking at a press briefing at the Damongo Divisional Police Headquarters yesterday 19th September, 2019, ACP Dormabah said the two suspected highway robbers arrested by the Police Patrol team on the Sawla to Tuna road are the criminals terrorising motorists and passengers on that stretch.

According to him, on 18th September, 2019 at about 4.00 pm, the police patrol team stationed at Sawla arrested and brought in suspects Mustapha Mumuni age 22 years and Ali Bukari age 20 years together with a black Apsonic Auroba motor bike with registration number M-19-UW-5099 with a report  that whilst on patrols on Sawla  to Tuna road where robbers have been attacking motorists plying the route, they spotted the two suspects at a spot where some motorist were robbed earlier Monday 16th September, 2019.

ACP Charles Dormanbah said a search conducted on them revealed some amount of  money in their pockets, Five mobile phones made up of four TeKno and an  Infinix  where found on them with  description of the suspects given by the various victims  of highway robbery attacks.

ACP Dormanbah also said a search conducted by the police in the rooms of the suspects in Tuna and Jindabour revealed a Jack knife, a dagger, a go to hell metal, two pairs of motorbike mirrors, two mobile phones and two covers, an ear piece and a metal whip in the room of Ali Bukari in Tuna but nothing was found in the house of suspect  Mustapha Mumuni.

ACP Dormanbah said the police counted the money retrieved from the suspects and it amounted to GHC 939.00 with the picture of  Abass Gumah, a driver from Bole on the infinix phone found on the suspects.

Abass had meanwhile earlier reported on the 13th September 2019  of being  robbed of the sum of GHC10,251, an Infinix  phone and a phone of his mate. The suspects will be arranged before the Bole Magistrate Court next week.

ACP Charles Dormanbah praised the Police team for the good work they are doing and urged them not to relent in their efforts towards ending crime in the region.