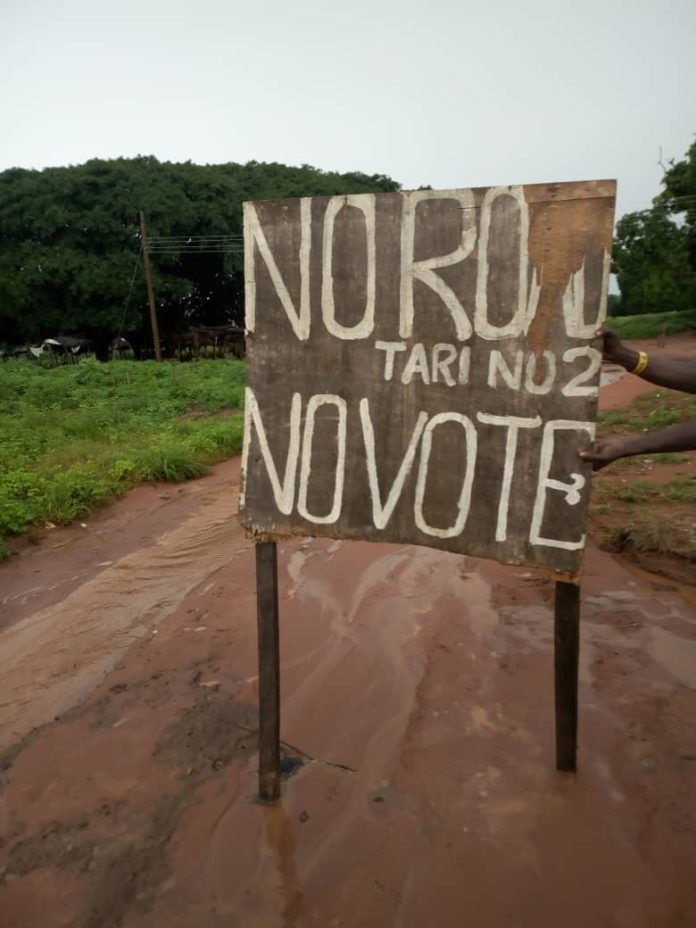 The Concerned Youth of Mankarigu in the  North Gonja District of the Savannah Region have said the major and only road that connects the Mankarigu area to other parts of the country and through which all their economic activities are carried out has been in a deplorable state for many years with successive governments paying lip service to them.

A statement signed by the Acting PRO Jansfour Issif Hafiz said the Mahama led administration finally awarded the road on contract in 2016 and actual work commenced on 7th November, 2016 and was expected to be completed by November 2018 and when done successfully, would have seen their road in a motorable state to enhance economic activities in the area and consequently alleviate the abject poverty in which our people are currently wallowing in.

The Concerned Mankarigu Youth called on the President to get a contractor back to site for work to continue on the Daboya to Mankarigu road or they go by the No Road, No Vote mantra in the 2020 elections.

Read the full statement from the group below:

PRESS RELEASE BY CONCERNED YOUTH OF MANKARIGU ON 16TH SEPTEMBER, 2019 JUBILEE PARK-TAMALE ON DEVELOPMENTAL CHALLENGES IN THE MANKARIGU AREA

Good morning to you all fellow patriots.

Let me seize this opportunity to thank you all for making it to this all important conference. Special mention must be made of our friends from the media fraternity for honoring our invitation.

We are grateful. Fellow concern youth, before going into the substantive issues that brought us here this morning, let me commend the founders and leaders of Mankarigu Students Association which was formed many years ago for the vision they had for forming that wonderful association.

Thus, for collective efforts in bringing the needed development to our people having being privileged to be enlightened.

Undoubtedly, we witnessed tremendous changes in society when this association was vibrant in the good old days.

Unfortunately, at a time when this association is badly needed to rescue our people, we have rather cultivated and well embraced the culture of silence while  leaving  our people at the mercy of greedy politicians to mess up with our lives.

I therefore want to use this opportunity to call on the founders to rivive the association as it is needed now than ever.

Let me also commend the IGP and all those who have hands in the posting of police personnel to Mankarigu police station which hitherto was left to rot.

It is a step in the right direction in curtailing the incessant attacks and unrest in the area and as concerned youth,we are grateful for the timely intervention.

Having said that, we are still calling on the President, Regional security council and all those concern to find a lasting solution to the situation so that we can once again enjoy the invaluable peace as before.

Fellow patriots, our media men, ladies and gentlemen. The Major and only road that connects the Mankarigu area to other parts of the country and through which all our economic activities are carried out has been in a deplorable state for only God knows how long.

Successive governments have paid lip service to this important issue. Fortunately, the Mahama led administration finally awarded the road on contract in 2016. Actual work commenced on 7th November,2016 and was expected to be completed by November 2018. This, when done successfully, would have seen our road in a motorable state to enhance economic activities in the area and consequently alleviate the abject poverty in which our people are currently wallowing in.

Ladies and gentlemen, it is disheartening to note that this very important road project was abandoned with only 18% done as I’m  speaking.

Though the current president, His excellency Nana Akufu Ado has mentioned this project on various platforms,we feel that it is part of the usual political rants as no action has been taken in your three years on office.

The lethargy with which the this issue is handled actually causes for Allarm and that brought us here this morning.

We are by this release calling on the president to get our contractor back to site for work to continue or we go by our NO ROAD NO VOTE mantra in 2020 elections.

Ladies and gentlemen, another important project that has been neglected at the chagrin of the good people of Mankarigu is the electricity project.

In 2015, a contract was awarded under the popular rural electrification project which was meant to see nine communities within the Mankarigu Zone connected to the national grid. This project was also halted at 86% in December 2016 which according to the former Energy minister was due to shortage of materials.

February this year, two long vehicles carried materials to the area to see to the completion of the project which triggered a seeming turf war between the MP and the DCE with both claiming credit for the yet to be achieved feat.

This politicisation we believe has caused the project to halt as we suspect some invisible hands that are holding back the progress of the project.

Ladies and gentlemen, on 20th June, 2019, one of our own, Abdul Ganiu popularly known as Ganiu Mankarigu posted on his Facebook wall a statement that was signed by the PRO of our DCE. In that statement, they claim five out of the nine communities will be connected to the national grid in a fortnight. Our question to the DCE from whose office the statement came from is; when did the meaning of a fortnight changed to mean months?

We have also heard some of our own who should have been advocating for development of the area, rather spewing lies on radio programs for political gains.

We as a concerned Youth of the area,we  are saying that enough is enough.

Enough of the politics! The DCE and the MP are hereby given a one month ultimatum to collaboratively get our light connected or they turn the area into a dangerous zone for themselves.

Ladies and gentlemen, while a number of equally important projects are still begging for our attention, we will stop todays conference here for everybody continue with his daily schedules.

Once again,thank you very much for coming.
Long live the concerned Youth.