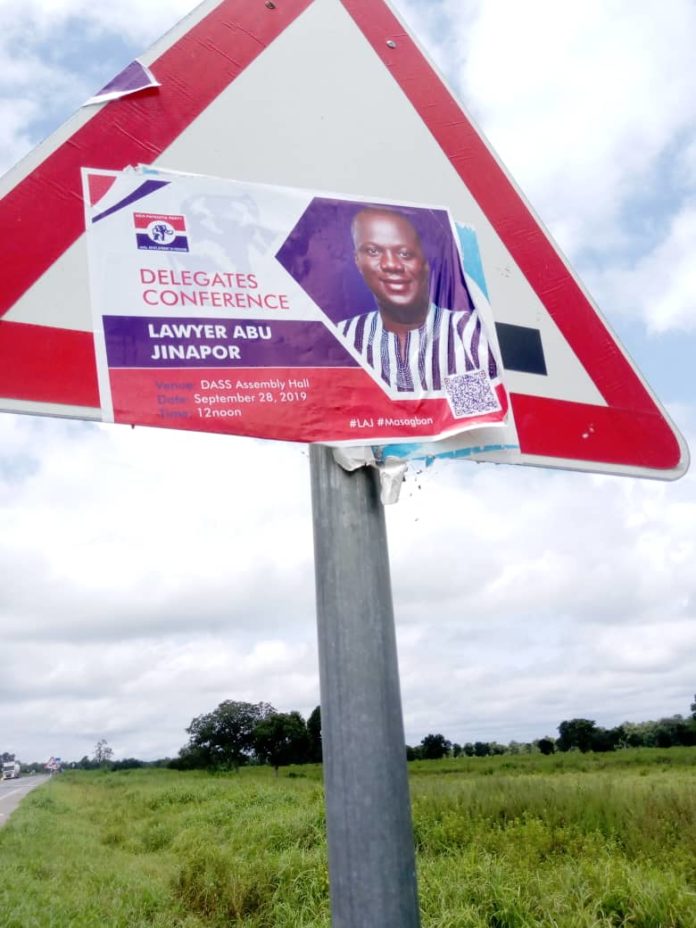 He said specific mention can be made of Buyanto, Achubunyo through to Tailorpe along the Damongo to Tamale road where his unfortunate development is posing a danger to drivers and users of the road alike, as it reduces visibility and breaches major traffic regulations.

The NDC Communication Officer said drivers, pedestrians and residents have raised red flags about the situation and as a responsible opposition they deem it very necessary to call on the appropriate authority to act as a matter of public interest.

Read the full statement below;

The attention of the Communication Bureau of the National Democratic Congress of Damongo constituency has been drawn to the reckless posting of NPP parliamentary candidate’s posters at unauthorised locations ahead of their parliamentary primaries.

These posters and flyers which have been flooded along the major streets and towns of Damongo constituency,have carelessly been mounted on sign posts and speed limits that are supposed to direct pedestrians and motorist.

Specific mention can be made of Buyanto, Achubunyo through to Tailorpe along the Damongo to Tamale road.

This unfortunate development is posing a danger to drivers and users of the road alike,as it reduces visibility and breaches major traffic regulations.

Drivers, pedestrians and residents alike have raised red flags about the situation and as a responsible opposition, we deem it very necessary to call on the appropriate authority to act as a matter of public interest.

All effort to get the ‘Buipe borger who is soo desperate to capture power in Damongo at the drop of blood to take off these posters has proven futile.

It’s important to note that, this singular act is not only against traffic regulations, but is highly illegal and breeches common sense.And the NPP Candidate who is tauted to be a lawyer should have known better…Does he expect us to elect him as an MP with this attitude of blatant disregard for the common law.

It’s important to also remind the sole NPP candidate(or so he calls himself), who has succeeded in buying himself into the constituency that,the road which he is consciously making unsafe today with his desperate tactics was constructed by the NDC administration.

Also, the modern streetlights which came along with the said road project have become dysfunctional for months now without any effort to replace the faulty lamps.

We are also aware that an amount of 40 million dollars which was designated after the construction of the road (Damongo-Fulfulso road) for routine maintenence work has since been squandered by the current administration without a single of such maintenence work happening.

It should be a worry to the NPP that this “sole tyrant of a candidate who works at the flagstaff has shown clearly that he has no faith and hope in the chances of his boss, Nana Akuffo-Addo. Reasons why he is going round campaigning and trying to buy the conscience of the people to vote for him as MP and endorse John Mahama, the NDC candidate as president. This is a sign of ungratefulness!

It’s important to remind the NPP and its “Money bag ” that, posters don’t win elections.The Damongo seat is safe and in good custody of Hon. Adam Mutawakilu (Galus).

No amount of money sharing and Kenkey sharing can safe the face of NPP from defeat. The people of Damongo constituency are worth more than money. It seems the whole money in the flagstaff house is brought to Damongo, but that will not still safe NPP from a humiliating defeat in the constituency.

We can assure the NPP and their desperate candidate that we’ll resist any attempt to endanger the lives of constituents in their wild thirst for power.

We wish to once again call on the appropriate authorities, particularly, the MTTU department of the Ghana Police Service, city authorities to act urgently on the matter in the larger interest.