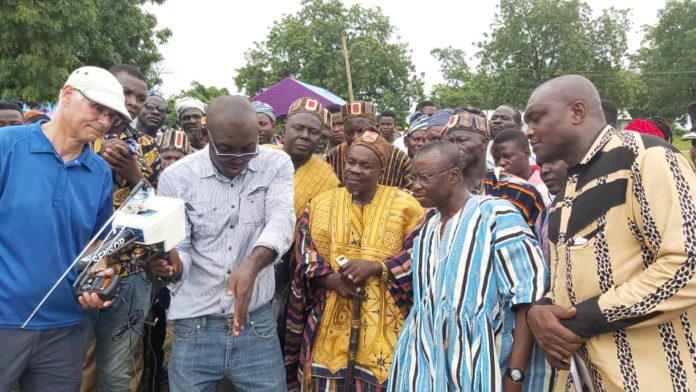 The Minister for the Savannah Region Hon Adam Salifu Braimah yesterday 14th September, 2019 visited the Kong and Choru Traditional Areas of Gonjaland at Kong and Jang respectively as part of his tour of the region.

At Kong in the Sawla- Tuna- Kalba District  where the Ministers tour commenced, the Chiefs and people of the area could not hide their joy for the ministers visit but took the opportunity to make known their plight as a community to the Regional minister and his team.

The Paramount Chief of the Kong Traditional Area Kongwura Seidu Jinkurge (I) in his address drew the Minister’s attention to the deplorable state of their road. Kongwura said the minister and his team were able to access Kong because he mobilised community members to get some parts of the road fixed. Among other setbacks, Kongwura mentioned lack of furniture and teaching staff at Kong Junior High school saying “It will interest you to know that, there’s only one teacher who handles the entire JHS block”. He pleaded with the minister to make sure the Kong Traditional Area is fully connected to National electricity Grid.  “There’s a CHIPs compound here but lacks virtually all that is required to run a facility of that kind “; Kongwura Jinkurge added.

The Regional Minister in his remarks thanked the people of Kong for the warm reception and introduced a team from Geoppex Engineering Limited who were there according to the minister to sight a place and drill a borehole for the people of Kong.

Hon. Salifu Adam Braimah on behalf of government promised to as a matter of urgency liaise with the appropriate institutions to address their challenges.

The Minister and his entourage then proceeded to Jang which is the capital of the Choru Traditional area of Gonjaland found in the Sawla-Tuna- Kalba District. After a warm welcome, the Paramaount Chief who is a Kingmaker of the Gonja Kingdom Choruwura Kabasagya lamented to the minister the nature of their road which he said has resulted in an increase in arm robbery cases in the area in recent times.

The Paramount Chief of the Choru Traditional area of Gonjaland requested for a Junior High school, health care facility electricity and portable drinking water among others for Jang.

The minister said the new regions were created for accelerated economic and infrastructural development and so it is against that backdrop that he wants to assure the people of Jang that they will soon breath a sigh of relief.

With regards the Junior High school, the minister assured that, the people of Jang will be provided with one.

He said Tuna on the main road to Jang is quite a distance and so providing the community with electricity will take some time, but in a short term, they will provide them with solar power while working on getting Jang connected to the National electricity Grid.