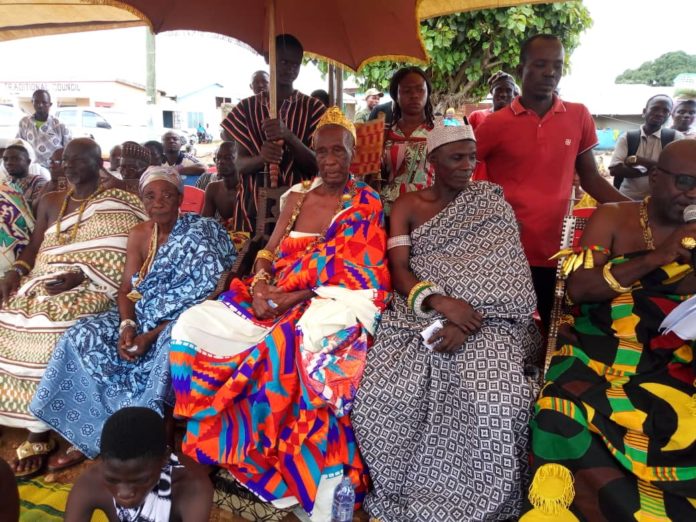 Speaking at a mini- durbar with organised by the North Mo Traditional Council at Bamboi, Hon. Braimah Salifu thanked the people for the warm reception accorded him and his entourage to the area and assured them of the commitment of the New Patrotic Party (NPP) government to develop every part of the country.

He assured them of working to extend electricity to the various communities in the area especially the Babator Farming Company since agriculture is very dear to the heart of the President of the country.

He further assured the people of the North Mo traditional area of taking into consideration their request of creating a district out of the present Bole district which will be done in the next two years since governance should be brought to the door steps of the people.

The Acting President of the North Mo Traditional Council Naa Kojo Pambo (II) speaking through the Chief of Bampewa Agbaah Jaaga  congratulated Hon. Braimah for his appointment as the first Regional minister for the newly created region and also assured him of the support and cooperation of the Chiefs and people of the North Mo traditional council.

Naa Pambour also used the opportunity to thank the Government for it’s flagship programs such as the Free Senior High School, Planting for Food and Jobs and others

He also enumerated the various problems faced by the North Mo Traditional Area and pleaded with the government to help in solving them.

According to the acting President, a petition was put before the previous government to make Bamboi the Capital of a district to be carved out of the Bole District and therefore wish to humbly appeal to the minister to assist in creating the district out of the current Bole district to enhance development in the area.

He said the area is under developed because of the vast nature of the district and this result to the neglect of many communities thus increasing poverty among the people in the area.

The Chief on behalf of his people further appealed for the construction of roads in the area and the extension of electricity to some communities especially the Babator farming Company which is the biggest irrigation project in the area that has employed many of the people in the area.

A fire station in the Bamboi township as well as a Police vehicle for the Bamboi Police Station was included in the several appeals made to the minister by the chiefs and people of the area.

The District Chief Executive (DCE) for Bole Madam Veronica Alele Heming speaking on the issue of a fire station for the area said she will convene a meeting at the Assembly with the assembly persons to see to it that one of the fire tenders is sent to the area for operations of the yet to be established fire station.

The Minister and his entourage also visited the Babator Farming Company called AgDevCo where he was taken round the entire farming project by the Management of the  10,369 hectare project.

The project of 5,000 hectares of net irrigable land has the vision to develop Ghana’s largest food production and processing hub.

The Minister Hon Salifu Braimah was full of praise for the management of the farms after seeing what has been produced in the farms.

On their way to Bamboi the minister stopped at every security check point to encourage the men and women of the Police/Military for good work they are doing to combat crime in the region.

At Bole Hon Salifu also visited a seedling nursery site at the Forestry department where he was taking round to see the seedlings of plants that are to be planted on the roadsides entering into and leaving the Bole township.