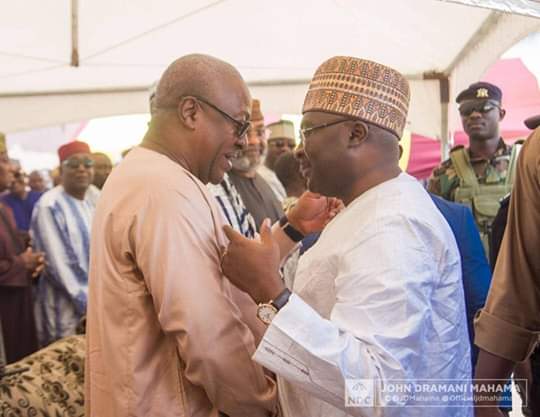 Vice-President Dr. Mahamudu Bawumia says he looks forward to former President John Dramani Mahama converting to Islam after the latter’s rendition of an Islamic prayer during the Islamic funeral of the National Chief Imam’s sister at New Fadama in Accra.

Hajia Aishatu Sharubutu’s funeral at the cleric’s residence attracted important political figures such as the Vice-President and the flag bearer of the opposition National Democratic Congress (NDC).

When it was his turn to say a few remarks, the former President rendered what all Muslims are enjoined to say when the death of a faithful is announced.

Innaa Lillahi Wainna Illahi Raajiun, to wit in classic Arabic ‘To God shall we all return.’

The rendition was so impeccable that those who know the former President’s background were unsurprised. He was born to a Muslim parentage, with many of his siblings belonging to the Islamic faith.

If the former President’s rendition of this important prayer in Islam had the attention of those present fixated on him, the Vice-President’s turn, which was full of humour, shook the gathering.

The Vice-President asked him to join them for congregational prayers otherwise called the Jumaat prayer today for conversion to Islam (Tuuba).

It was a gentle remark but had the assemblage of regional imams and other clerics murmuring in agreement.

“I hereby invite the former President to join us in the Islamic faith,” a humorous invitation which seeped into the gathering and, of course, had him trying to suppress a smile.

The two politicians shaking hands and smiling created an attractive scene at the solemn religious function at the end of the programme.

Being a solemn spiritual function, it was devoid of politics, but the politicians found a way of prompting smiles on the faces of their audience.