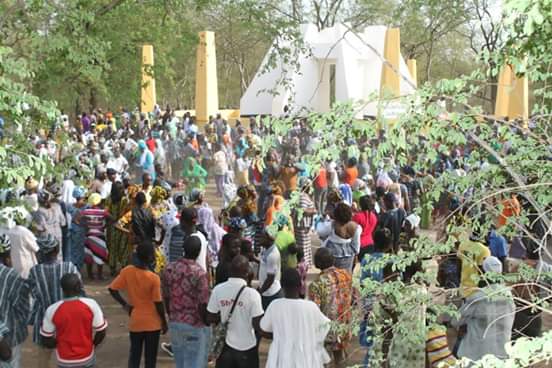 Sumaila Ndewura Jakpa is known in history as a great warrior. He is credited the status of the establisher and expander of the Gonja Kingdom. The vastness of the Gonjaland is a crystal clear evidence of the military might and prowess of Jakpa. The Gonjaland covers about an area of 37,582 square kilometres which constitue about 16.09% of the total land area of GHANA( 283,533 sq.km).Every son and daughter of the Gonja kingdom prides himself or herself as a true descendant of Ndewura Jakpa. His heroic deeds are immortalised in songs, tales and poems. Ndewura Jakpa is held in high esteem that when a free born Gonja wants to mention the name of the place where he is said to have died, he or she must sit down and take off his or her cap or head-gear because it is considered a sacred place. Besides, the name of the place has become their greatest oath. It is also a practice in Gonjaland where parents name their children after Ndewura Jakpa to laud him and also imbibe in them the spirit of fortitude, braveness and soldierness of Jakpa.

It is no doubt the fact that Ndewura Jakpa has been honoured by naming some institutions and landmarks after him. Realistically, almost every public senior high school in Gonjaland has either a house or dormitory named after him. It is also factual that almost all the districts in Gonjaland has a junior high school to his name and the seat of the Gonja kingdom, Jakpa Palace is to his name. It is also expedient to note that amongst all the institutions and landmarks named after him, Ndewura Jakpa Senior high school in Damongo is the outstanding. The school was not only named after Jakpa to immortalise him but to also glorify the Gonja Traditional council in general and the Damongo traditional council to be specific.

One may ask how the school glorifies the Gonja kingdom. The point is not far fetched. The school has four boys houses/dormitories and two girls houses/dormitories. It is important here to note that all the four boys houses/dormitories are named after the first four Kings/Yagbonwuras of blessed memory who ruled Gonja after the seat of the kingdom was moved to Damongo. Yagbonwura Ewurbunyanso Ewuntomah Awusi of the Wasipe gate whose reign lasted for 32 years( 1942-1975) has a house(Awushie house) to his name. He is noted in the history of Gonja to  move the seat of the Kingdom from Nyange to its present day, Damongo. Yagbonwura Abudu Mahama Kurabaso from the Bole gate who ruled the Kingdom from 1975- 1982 after the demise of Awusi also has a house(Kurabaso house) named after him. Yagbonwura Timu who was known in private life as J. A Braimah of the Kpembi gate was the third king of Gonja after the capital was relocated to Damongo. Before becoming a king, he was the member of parliament for the East Gonja constituency and served in Dr. Nkrumah’s government as a communication minister and in Busia’s government as Chairman of northern regional council(regional minister). His reign lasted for four years(1983-1987).Timu house is to his name. Kanyiti house is also named after Yagbonwura Kanyiti of the Tuluwe gate who  ruled Gonja after Yagbonwura Timu. Yagbonwura Kanyiti ruled Gonja from 1987-1990. It is also worth noting here that the two girls houses, Lermu house and Gbirnyiti house are named after two great clans or gates who ascend to the Damongo skin.

From the above, it is a cut and dry fact that the school  eternises Ndewura Jakpa and glorifies the Gonja kingdom and the descendants of the above Kings and their gates. For all these, one would have expected that the school received  much attention from the Gonja Traditional Council, the Gonjaland Youth Association(GLYA) the sons,daughters and grandchildren and  members of the gates of the above Kings and every son and daughter of the Gonja Kingdom. To add, there should have been a deliberate and conscious efforts made by all who matters in the forward match of the Gonja Kingdom to see this school become a better one. But, the reverse is seen happening. Candid to the point, the shabby, terrible and dishonorable nature of the school in terms of infrastructure, layout and encroachment of the land is unspeakable and does not commensurate the status and standing of Sumaila Ndewura Jakpa. The school is without an assembly hall and school gatherings are held under trees.

The dinning hall cannot contain all students for a meal and  students  take their meals in batches. There are not enough teacher bungalows. Out of the about 76 number of teachers in the school, only 10 are resident on campus thereby making supervision and monitoring of the movements and activities of students difficult. The administration block is obsolete and not spacious enough with to comfortably accommodate all deserving offices. The larger part of the school land has been encroached. The problems are listless.

Let me at this point acknowledge the efforts of some personalilties who worked their hearts out to see the school rechristened  to Ndewura Jakpa Senior high/ Technical School(NDESCO)  from Damongo Senior high/Technical school(DASECTECH)and the renaming of the houses after Yagbon Kings. Mr. S. B Awari, headmaster of the school from 1997-2003 and his deputy as that time, Mr. Abubakari Salia deserve salutations for that yeoman’s job done. They have played their part in honouring Ndewura Jakpa. It now behoves on every son and daugther of the land to make the school befit the pedigree of Jakpa. The Gonja Traditional Council under the leadership of Yagbonwura can take up the construction of either the administration block or residence for teachers. The council can also through the Yagbon foundation  institute  either an annual or termly award schemes for both teachers and students who performed well for that period and grant scholarship packages for students who performed well in external exams.

The Gonjaland Youth Association( GLYA) can  donate stationery and other learning materials to the school. The association can also put up a physical structure that will serve a purpose in the school. The family  and members of the gates and clans of these honoured kings( Awusi, Kurabaso, Timu and Kanyiti) can do their part by donating items to the houses named after their father or better still help to renovate them.Sons and daughters of Gonjaland who are in strategic positions of government can influene decisions and push development to the school and those resident around the school can help to prevent the encroachment of the land of the school. The members of the two gates of Lermu and Gbirnyiti can donate items of benefits to the houses named after their gates. Let us all as Gonjalanders play our part to ensure the betterment of the school. If it becomes great, it is a plus and honour to the kingdom. It is ours. Yes, it is.
11th September, 2019