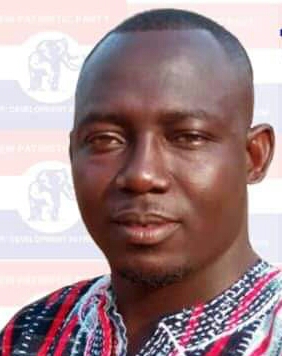 The New Patriotic Patriotic (NPP) has given up on a feud the party has with a former Damongo Constituency Chairman of the party Nana Kwame Aboagye.

Mr Brian Braimah Kamara who is an aide to the Savannah Regional Chairman of the NPP Alhaji Iddrisu Sulemana popularly called Professor Kalamonia explained that the Regional executive board of the pary in their quest to get a regional party office for the NPP in Savannah region approached stakeholders in Damongo for a piece of land.

He said the District Chief Executive  (DCE) for West Gonja Hon Saeed Muazu Jebreel and the Savannah Regional Executives of the NPP approached an opinion leader and Secretary of the Damongo skin lands requested for a piece of land opposite the Damongo Nursing Training College for development and were clearly told no one occupies the said piece of land, because all those who were holding pieces of land there were relocated to give way for the construction of a yard for the contractors working on the Damongo-Fufulso road.
“Thus the board took steps to fetch 6 trips of sea sand on the land for development but Nana Kwame upon seeing that some work was ongoing on the land also fetched 1 trip of sand to cross the road and instructed some boys to start molding blocks”, he said.

Mr Brian Kamara said Nana Kwame never contacted any of the regional executives before his actions and even went ahead to report the Savannah Regional Minister Hon Salifu Adam Braimah, the Regional executive board and the DCE for West Gonja to the Damongo police on the said piece of land. Mr Kamara said the Regional Minister, the DCE and the Regional Organiser of NPP were at the police station to respond.
Mr Brian Kamara disclosed that the NPP on the Savannah Region led by Proff Kalamonia “has thus resolved to leave the piece of land to those claiming ownership of the land”.

Meanwhile Nana Kwame has also issued a statement on the issues surrounding the plot of land. He said he bought the land and received the necessary documents in November 2008 and that the said land does not fall under the Chinese yard at Damongo and so he was never relocated or given a new land.

He said all those whose plots of land that the Chinese yard covered were affected were relocated. He said his land is located outside the yard and cannot be considered as one that was affected by the arrangement for the Chinese yard.

Nana Kwame Aboagye said it is also a fact that before the Regional Executives sent the six trips of sand to the land, he had already contracted a grader to do some work on the land ans so ut is unfortunate for Brian Kamara to say tha he Nana Kwame only sent sand there and starting moulding blocks after seeing development on the land.

Nana Kwame Aboagye said he was rather invited by the Savannah Regional Security Council (REGSEC)  of which the Regional Minister is the Chairman and that he Nana Kwame never reported anybody to the Police but on the contrary was invited.

Bole- based Nkilgi FM broke the news of a feud between a former NPP Chairman for the Damongo constituency Nana Kwame Aboagye and the executives of the party over a plot of land opposite the Damongo Nursing Training College on the main Damongo to Tamale road.
Source: nkilgifmonline.com