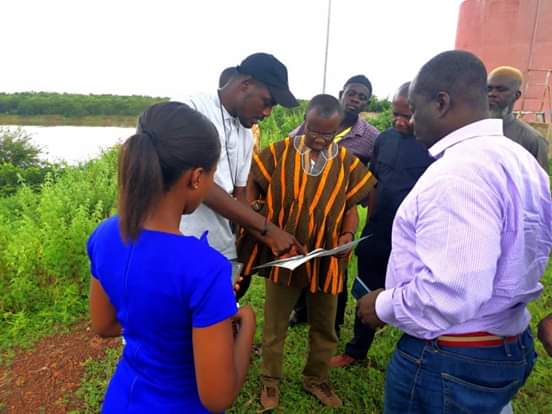 In the early hours of today 5th September, 2019 the Hon DCE for Central Gonja, Mustapha Mahama together with the Savannah Regional Minister, Hon Adam Salifu Barimah, introduced a team from LMI Holdings, the company to undertake the development of the Debre Port into one of the biggest and bussiest inlands Ports in West Africa to the chief of Debre; Debrewura Soluwu Sakara Asumah.

The team which was led by Mr Kwaku K. Apeadu, Non-Executive Director, briefed Debrewura and his elders about the project and its potential to positively change the lives of the people in Central Gonja and Savannah Region in  general. He also said the  project when completed will serve as a strong factor in terms of economic and regional balance of development, as well as having a great influence on national integration to the world of economic market.

The Regional Minister Hon Adam Salifu Braimah in his turn thanked the chiefs for their cooperation so far and urged them to make peace their priority since that was the only way investors will be willing to bring their investment to the area.

He promised to make sure the chiefs and people of the area fully benefit from the project.
The team then visited the project site for inspection before moving to site to commence work. The project involves the dredging and development of the Port for Ships to land and development of a modern industrial park which will have over 80,000 capacity intake.

The Debrewura also thanked the Regional Minister, the DCE and the government for choosing Debre for such an important project and thus assured the team he and his people’s unflinching support to see to realization of the project.
Source: Osman Kunkarga SulemanC