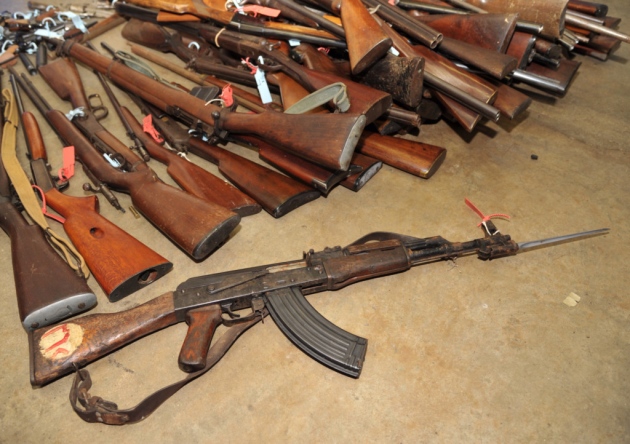 A sub- Chief of the Wasipe Traditional Area of the Gonjaland Chief Manbolwura Adams has said he suspects some 59 AK-47 assault rifles that were being transported from Accra to Walewale in the North East Region according to the Police, were destined for Lukula in the North Gonja District of the Savannah Region which shares a boundary with the North East Region.

Speaking to Bole- based Nkilgi Fm, Mambolwura Adam fingered a high profile politician from Walewale for buying the 59 AK-47 assault rifles that were arrested by the Police and called for a thorough investigation into the issue.

A news portal, myjoyonline.com  reported that three men have been arrested for their alleged involvement in the shipment of some 59 AK-47 assault rifles from Accra to Walewale in the North East Region.

The report said the suspects were picked last Friday at Nsakina near Ablekuma in the Greater Accra Region.

The operations of the syndicate according to myjoyonline.com were uncovered by personnel from the counter-terrorism unit of the Ghana Police Service, following weeks of intelligence gathering and monitoring.

“The heavily armed operations squad numbering 10, lay siege at a house in the community on Friday as some men negotiated the sale of an AK-47 assault rifle in that facility” reports the news portal.

It was also reported that the Director of Operations at the Accra Region Police Command, ACP Kwesi Ofori who spoke after the operation, did not give further details about the syndicate but said, investigators were keeping an open mind and will follow all credible leads.

“The counter-terrorism squad initially arrested four persons but it is currently focusing on two, who are said to be key members of a very dangerous arms smuggling syndicate” myjoyonline.com reported.

Communal violence erupted last month between two groups after a misunderstanding over the building of a mosque at Lukula in the North Gonja District of the Savannah Region resulting in the killing of two people and the burning of about twenty eight (28) houses.