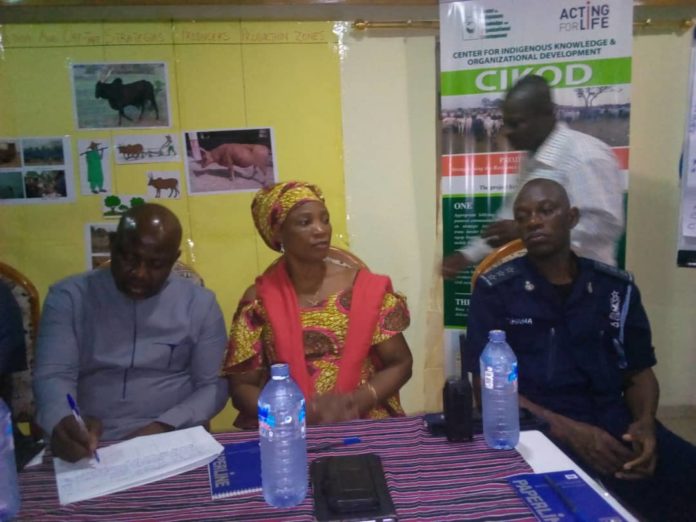 A non- governmental Organisation called the Center for indigenous Knowledge and Organisational Development (CIKOD) has organised a Livestock Mobility for better Access to Resources and Market in West Africa (PAMOBARMA) forum at Bole in the Bole District of the Savannah Region to enlighten stakeholders on how cattle mobility should be done to control farmers and herders confusion in our local communities.

The main purpose of the program which would be held for five days, that is; from 3rd September to 7th September 2019 is to look at better alternatives into ensuring  people within cattle rearing communities derive maximum benefits from the value chain of cattle rearing which includes food production and leather exports and to also deliberate on the menace of farm destruction by cattle as well as the constant friction between farmers and the Fulani herdsmen.

Speaking to Bole based Nkilgi FM, the Deputy Director for CIKOD who is also the Project Manager for the program. Mr. Daniel Banuoku said they are here in Bole basically start what he termed the “assistant debate”, which aims at bringing together stakeholders and actors within the livestock sector value chain.

He said they would have a discussion on how to better manage the incidence of trans- humans in ways that can lead to benefits economically as well as social benefits to cattle farmers and also ensure the environment is safe from rapid degradation as a result of cattle farming.

He added that the project has a number of components the first being a “natural resources and environmental issue” and the second being the “market infrastructure component”.

Mr Banuoku explained that the infrastructure component will deal with the creation of livestock markets, one in the Upper West Region and one in the Savannah Region so that the district assemblies involved would improve in their revenue generation.

The District Chief Executive (DCE) for Bole Madam Veronica Alele Heming said she had planned for a similar initiative in her  District having been  the only female DCE in Ghana to have attended a program at Holland on how cattle should be controlled and reared and also how cattle can be fed in our local communities.

She added that the five day programme organised by the CIKOD would enlighten stakeholders on cattle rearing is important and would be beneficial one for cattle farming.

The Chairman for the Bole District cattle Farmers Association, Alhaji Abdulai Yussif Nfah thanked the organisers of the program.

He said a couple of NGOs came together to help cattle farmers, and from his view, they can benefit if only they work hard to improve the cattle farming in the district.