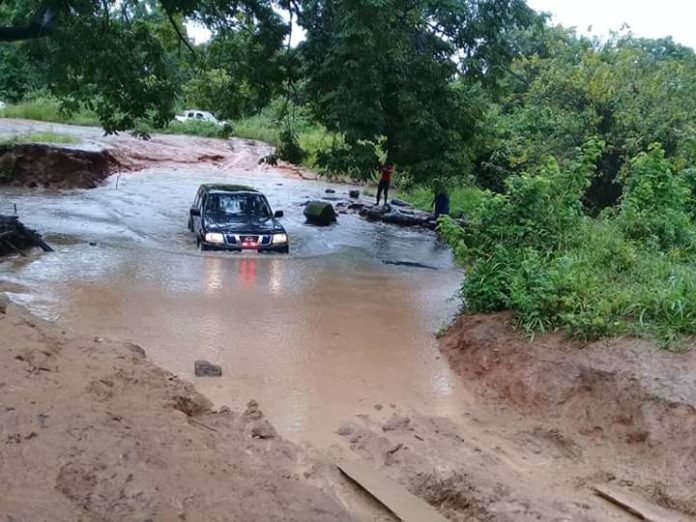 The Daboya-Mankarigu Constituency of the Savannah Region (North Gonja District) has been divided into two as a result of  heavy rains and bad road network.

Thousands of tons of foodstuffs are left to rot in many farming communities in that part of the Savanna Region with residents of some of the communities threatening not to vote in the 2020 general elections if the road network of the area is not worked on.

The Savanna Regional Minister, Hon Salifu Adam Braimah who was accessing the road of the area two weeks ago to the trouble town of Lukula had to cut short his visit because of the poor road network of the area that saw vehicles of his entourage not being able to cross to the other side of the constituency because of the recent rains that have flooded the road.
Some residents of Tari No2, a farming community in the Daboya-Mankargu Constituency have threatened not vote in the 2020 general elections if the road network remain same.

Residents of the community had mounted a billboard with the inscription ”No road No Vote” right in the middle of the road before one gets to the community.

Bole based Nkilgi Fm’s correspondent Zion Abdul- Rauf spoke to a Resident of the Community called Waliu Awal and he categorically stated that of the road in the area is not worked on, they would not vote.
He said sick people in the community are dying because it is impossible to pass through the road to Daboya to access the health centre there.
Source: nkilgifmonline.com