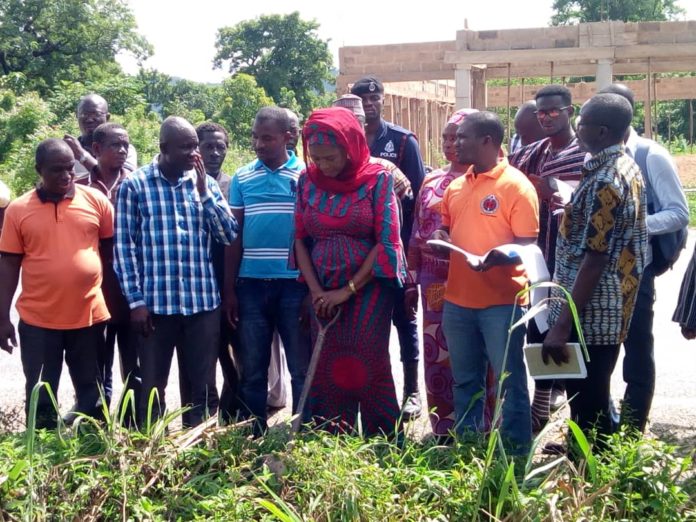 The District Chief Executive (DCE) for Bole district assembly in the Savannah region on Friday, 23rd August 2019, handed over a Market, CHIPS compound and School. to (3) three communities in the Bole district on Friday 23rd August, 2019.

The DCE and her team first made their stop at Jama in the South of the Bole District where she handed about 80 market stalls to be constructed by the contractor Morasko company limited within six months.

The Chief of Jama, Jamakoro Nana Kojo Pambo (ll) and his people were very happy about the project and thus prayed for God’s guidance for the DCE and the entire Bole district.

The DCE and her team continued to Teselima where a CHIPS compound project was handed to a contractor for execution. The people of Teselima thanked the DCE for the numerous projects she has brought them ranging from One Village One, a School and now a CHIPS compound.

The Assemblyman for Teselima, David Bii Jimah thanked Madam Veronica Alele Heming for at least doing what they have yearned for a very long time.

He said his own party, the National Democratic Congress   (NDC) could not provide them the clinic even though the community pursued that agenda for long.

Bro-Lee company limited is expected to construct the clinic for the Teselima community within six (6) months.

The DCE and her team ended their mission at Banda Nkwanta where they met with chiefs and people of the community.

Madam Veronica Alele Heming awarded a contract fir the construction of a  3unit classrooms block (E/A School) to add more classrooms to pupils of the school.

The Chief of the community, Duawura (Banda Nkwanta chief) Joseph Kelli Sakara  reminded the DCE about projects she promised the community earlier, thus a clinic and a Toilet facility.

The DCE on her part mentioned that, development are in bits and that though their topmost priority is in the health sector, it was a project in the educational sector that has arrived earlier but assured the Chief of her commitment in ensuring that massive developmental projects get to the community.

Present at the ceremony was the Dua-wura Joseph Kelli Sakara, elders and the Assemblyman, Hon Abdulai Amidu.