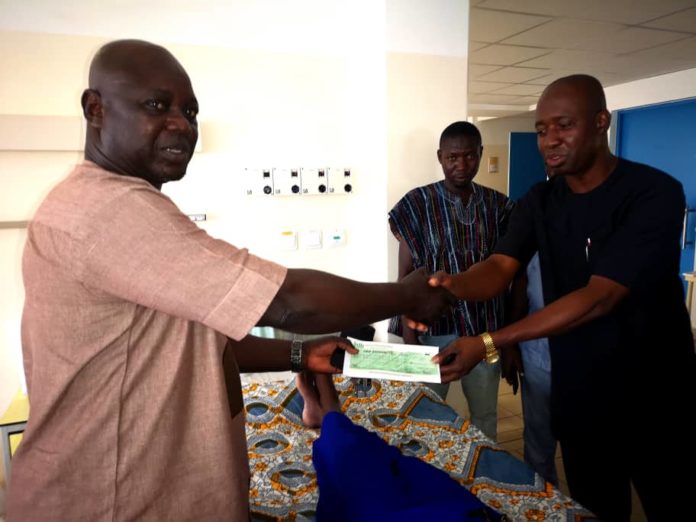 The District Chief Executive (DCE) for Central Gonja in the Savannah Region, Hon Mustapha Mahama, yesterday 19th of August 2019 supported the family of Taharu Walahadi with an amount of Four Thousand Ghana Cedis (GHc 4, 000) at the Tamale Teaching hospital.

Walahadi was admitted at the Tamale teaching hospital on 7th June 2019 with a complicated pregnancy after the baby died inside her womb a few days before being rushed to hospital. She has since undergone several medical surgeries and procedures to save her life, but still in a critical condition.

Alhaji Baba, the head of Social Welfare Department of Tamale Teaching Hospital who wrote a letter to the DCE for Central Gonja District  to solicit his support briefed him on the lady’s condition in the hospital. He also recounted how it was so difficult for Mr Imoro Tanko, the husband of Walahadi to pay for the hospital bills and other medications prescribed to be bought, that at a point he Mr Tanko, lost hope on everything and that the DCE gesture was prompt and timely.

In that short ceremony, the DCE, Hon Mustapha Mahama thanked the management of the hospital for their tireless efforts in ensuring that the lady had the best of treatment.

He also assured that, his doors were opened and ready to help any day, any time.

The family was grateful to the DCE for the kind gesture.