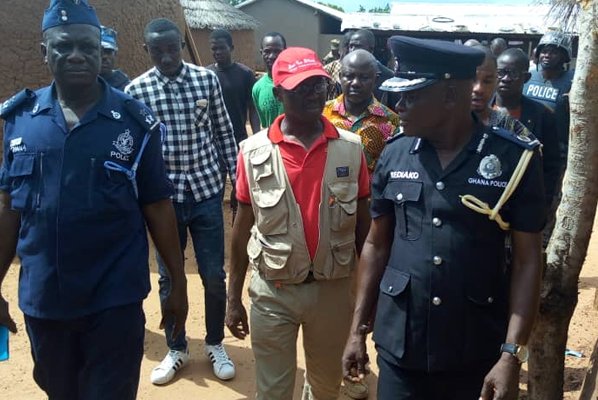 Heavily armed men on motorbikes on Saturday evening launched a brutal tit-for-tat attack in Lukula, a farming village in the North Gonja district of the Savanna region.

They burnt down dozens of houses and chased residents into the bush, the local assembly member for the area, Alhaji Sar confirmed to JoyNews.

Communal violence erupted on Thursday evening between two groups after a misunderstanding over the building of a mosque, which resulted in the killing of two members of the group opposing the construction, police in the region had also confirmed.

Three members of this same group sustained injuries and were treated at a health centre in the area, according to official sources at the facility.

Angered by the incident and subsequent police inaction,  the faction also attacked Saturday morning and burned down at least three houses of their rivals who fled the village following the Thursday attack.

Hours later, more than 25 gunmen then raided the isolated village with a counter-attack and set on fire more than 30 houses amidst sporadic gunshots.

Confirming to JoyNews, Assemblyman of the Lukula electoral area, Alhaji Sar said the gunmen launched a rash of arson attack on houses of the villagers leaving a thick smoke billowing into the sky from the village.

“Unfortunately, this afternoon, I just raised my head and look at Lukula side and they are a lot of smoke as I speak… Currently, they are burning houses at Lukula; I can see a lot of smoke in Lukula,” Alhaji Sar spoke to JoyNews from a hideout in a nearby village.

An eyewitness in the village who saw the gunmen before the attack said they came from Daboya and were on 25 motorbikes and using sophisticated weapons.

The source said the surprise raid started at about 4 pm and lasted for almost 20 minutes uninterruptedly or without any form of resistance from the villagers.

“They burnt 28 houses and rode their bikes away but they did not get anyone to kill and nobody has been injured, for now, the source told JoyNews immediately after the attack ended, adding that, ” they fired warning shots upon reaching villages on the road when they were going after the going”.

The Savannah Regional minister and a team of joint security officers arrived in the community late Saturday night after the attack, his aide, and public relations officer Mufti Borejinkpr Habi has told JoyNews.

He said the village has been deserted by its residents and that armed police and military personnel have taken control Sunday morning to deescalate the situation and to prevent further reprisals.

Residents of this village have been shapely divided after the creation of the Savannah and North East Regions.

Originally under the North Gonja district of the Savannah Region, some residents of Lukula and several others in the area, including Mankarigu, have been protesting to join the West Mamprusi municipal in the North East Region.

Over 40 communities more, all inhabited by minority tribes including the Tamplumas, are in this protest to be added to the North East Region.

Tensions have escalated in recent months between the Gonjas in Daboya and Mamprusis in the Sor Traditional area in Walewale after the chief of Daboya attempted to install chiefs in some of the communities already occupied by Mamprusi chiefs.

It became a full-blown boundary dispute between the Yagbonwura and Naayiri two months ago after a meeting with a Gonja delegation at the Naayiri’s palace in Nalerigu ended inconclusively.

Residents who are protesting to join the North East Region cite social, political and economic deprivations but the Gonjas maintain the land belongs to them and would not accept any breakaway.