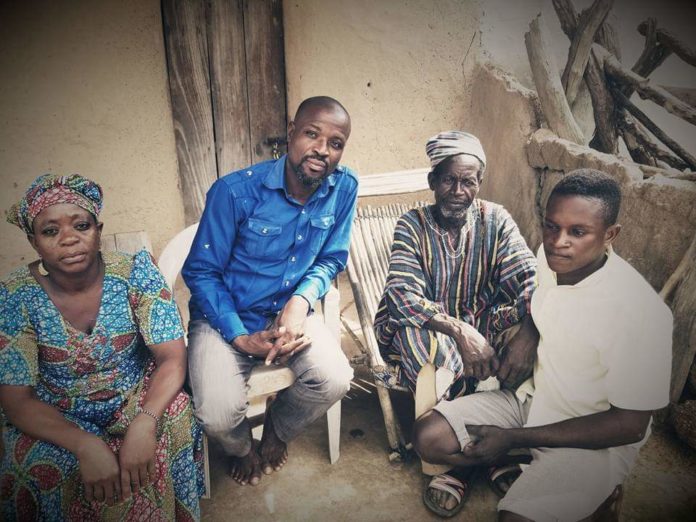 It is a Friday in Tanpe, and the community which is about six kilometres to the west of Bole is in a market mood as they were preparing to move to nearby Bole for the weekly market day…The people have been waiting for a tricycle which comes to the community every Friday once a week to pick them to Bole.

Nkilgi FM, a Bole based local radio station is coming to get first hand information on the plight of this community and an excited community about six households gathered…seeing a good car (Mitsubishi L200 pickup) was surprising as children followed the vehicle from the entrance of the community to the center.

Tanpe is an old community near Bole. Inadequate infrastructure has hampered development. The road network is in poor condition, making this area surprisingly almost isolated.

For many people in this community, radio is virtually the only means of communication and connection to the authorities in Bole. The people have appealed to the Bole District Assembly to fixed their only borehole for about a year now but nothing has been done about it.

Sister Ama Tanpe, a resident of Tanpe and an avid listener of Nkilgi FM decided to use the radio to drum their plight to authorities. She has been calling into the morning show and other programmes of the radio station like “Time with our MP” and other development based programmes to complain about their broken borehole the past one year.

Her appeal is so persistent that Nkilgi FM decided to move into the community to know much about their plight.

Moving into the community was really difficult. A stream has cut off the community from Bole on the main route this rainy season and so one would have to pass through a different route inside the research farms of the Bole sub-station of the Cocoa Research Institute of Ghana. Even that route is almost cut off at some points- and we realised no vehicle has been to the community the past one week. We managed to get to the community against all odds.

On reaching the community we realised there is no electricity and the borehole the people consistently complained about was really not functioning.

Sister Ama Tanpe and and the handful of members of the community were elated meeting us and immediately sent us to an Elder of the Community called Safalnaaa Jebuni Jansawu.

The elder was full of praise for Nkilgi FM for our development based programmes and thanked us for visiting them. He called on the Bole District Assembly and the Member of Parliament for Bole-Bamboi to come to their aid. The elder said they have no electricity and the road to the community is in a deplorable state but for now their urgent need is water.

Nkilgi FM decided to visit the dam which is about 2 kilometers from the community (see 1st photo). The person who accompanied us to the dam said the residents of the Community drink the water alongside animals of Fulani nomads who sometimes pass through the community and that during the dry season the water becomes muddy and as such undrinkable.

Back to the community the elder of the Community (see 2nd photo) Safalnaa Jebuni Jansawu told Nkilgi FM to save the community from collapse. He said the lack of amenities has made some residents to move to Bole to stay permanently. He explained that Tanpe has been in existence for hundreds of years and that his great grandfathers have remained in the community and that the gods will not forgive him if the Community collapses during his reign as the indegenous Safalba Chief of the Community.

The story of Tanpe is one of many communities with the same plight in the Bole District but Nkilgi FM has decided to bring into limelight the problems of all such communities especially those close to Bole.

Most communities have for too long been excluded from decision making in their societies and letting their voices be heard on Nkilgi FM empowers and mobilises them. We have broadcasted programmes that has influenced better health, hygiene and agricultural practices, as well as school attendance and as well brought about empowerment by educating people on their domestic and public rights.

Phone-in programs reveal many problems including human rights violations, political issues, and corruption and provide listeners with advice on how to act in light of these situations. Nkilgi FM has also become a natural organiser and contact point during emergencies.

More importantly Nkilgi FM has influenced individuals and groups to successfully pressure the Bole District Assembly Assembly and the Member of Parliamenr to do more for them. Nkilgi FM has a become a powerful tool for educating and informing communities on all aspects of life and has multilingual programs that promote human rights, tolerance and acceptance through news programs, discussions of current events and human rights issues, and entertainment.

The next community we intend to move in is Horiyiri also close to Bole. Stay Tune